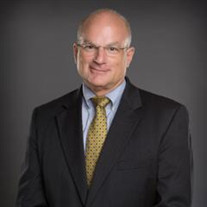 Dr. Jeffrey Richard Cragun 1954-2021 Jeffrey R. Cragun, 67, of El Dorado Hills, CA, passed away November 20, 2021 at Mercy San Juan Hospital surrounded by his sweet, loving wife and his four devoted children. Born on October 5, 1954 in Ogden, Utah to William Joseph Cragun and Joyce Nielson Cragun, Jeff was the third of four children. The family moved to San Jose, CA when Jeff was 6 years old. From a young age, Jeff sought out adventure, including mountain climbing, bicycling, and backpacking. He had many other hobbies and interests, such as woodworking and music, that enriched his life and those around him. Jeff graduated from Pioneer High School in San Jose, CA class of 1972, and served a mission to the Paris France Mission for the Church of Jesus Christ of Latter-day Saints. Upon his return, he married his high school sweetheart, Lisa Diane Jones, the absolute love of his life, in the Oakland Temple on June 26, 1976. Jeff graduated college from Brigham Young University in 1978, summa cum laude, majoring in chemistry. He attended UCLA for medical school and residency in OB/GYN. He then moved to Davis, CA to serve the Sacramento community, later relocating to El Dorado Hills, CA. Jeff successfully owned and operated Folsom OB/GYN for over twenty years. He has held several leadership positions throughout his career, including the Medical Director of Women’s & Children’s Health for the Dignity Foundation of Sacramento from 1990 to 2000, several active positions in the American College of Obstetricians & Gynecologists, and most recently the Chief of Staff at Mercy Hospital Folsom. A devout member of the Church of Jesus Christ of Latter-day Saints for all his life, Jeff shared his gifts of compassion, empathy, and strong testimony while serving as Bishop of the Davis, CA Ward for 5 years. His other stake and ward leadership roles focused on influencing and guiding young men and women, including serving as a counselor in the Young Single Adult Ward in El Dorado Hills, CA. He is remembered by all as a warm and witty man who worshipped God in both words and deeds. He was giving of his time, talents, love and powerful testimony to all those he served. While Jeff excelled in his professional, church, and community endeavors, his family was the most important part of his life. He often said how blessed and fortunate he was to have his soulmate Lisa in his life to raise together their three sons and daughter. His teasing jokes and wildly fascinating stories kept his family in stitches, and his generosity is remembered by each of them. His unfailing work ethic will live on in his children as well the exciting, endless adventures he took them all on year after year. He could not have been prouder of his children, often bragging to anyone who would listen about the accomplishments they were pursuing. Jeff’s memory will be cherished and kept alive by his precious wife Lisa Cragun of El Dorado Hills, CA; their children Scott (Yvette), David (Jenni), Allison and Ben (Mary); as well as his sweet and wonderful grandchildren who completely adore him: Jonah, Enoch, Asher, Samuel, Hiram, Olivia, Elliott, Clive, Vincent, Simon, Marlowe and Elinor; his loving mother Joyce, his brother Hal and his two sisters DeNiel and Nancy. Funeral services will be held Saturday, November 27, 2021 at 11am at the LDS Chapel at Temple Hill, 2110 California Circle, Rancho Cordova, CA.

The family of Jeffrey Richard Cragun created this Life Tributes page to make it easy to share your memories.