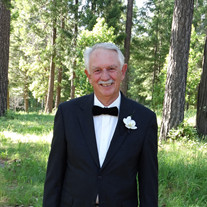 Celebration of Life Friday September 13, 2019 at 1pm The Apple Mountain Grille at Apple Mountain Golf Resort 3455 Carson Rd, Camino, CA 95709 Jon Roger Toolson was born on March 20, 1937 in St. Anthony, Idaho. As a child and youth, he lived in St. Anthony and Boise, Spokane Washington and Los Gatos, California. Later, he resided in San Jose, Los Gatos, Ramona and Placerville. Jon passed away in Placerville California on August 10, 2019. Jon, nicknamed “Jay”, enjoyed his last years in a loving marriage with Linda Toolson, where they enjoyed gardening and beekeeping and rearing two beloved cats. He was an amazing father to daughter Rene and sons Joe and Jon (and wife Yuka), as well as step daughters Pam and Amber (husband Brian) and stepson Roy (and wife Marebek). Jon is also survived by his younger sister Kathy and brother Michael, as well as eight grandchildren – Maya, Coco, Katie, Brandon, Brian, Madalyn, Malia, and Ryan. An avid golfer for several decades, Jon is remembered fondly as both a skilled golfer and kindly mentor. He organized numerous tournaments and events to support local charities and served for many years as a volunteer at the Upper Room Dining Hall. Jon spent five years in the US Marine Corps followed by thirty years as an engineer for Lockheed Missiles and Space Company. He coached dozens of softball and baseball teams, taught his kids skiing and fly fishing, led backpacking trips into the Sierras and left his children with an enduring love and respect for an active life spent out of doors in pristine wilderness. Always designing or engineering household projects, he left a legacy of self-reliance, fortitude, and resourcefulness with a touch of humor. Friends and family are invited to attend a celebration of Jon’s life on Friday September 13, 2019 at 1pm at the Apple Mountain Grille at Apple Mountain Golf Resort at 3455 Carson Road in Camino.

The family of Jon Roger Toolson created this Life Tributes page to make it easy to share your memories.