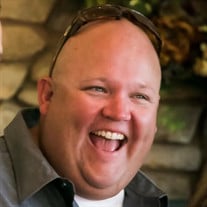 Today we announce the passing of Officer Joseph Edward Boberg. Son to Joanna Jurgens and Michael Boberg, husband to Brandy Boberg and father to Chase and Cailyn. Born on October 31, 1978, in Carson City Nevada, Joe lived his life in and around the beautiful shadow of the Sierra Mountains. From his early days in the basin of South Lake Tahoe as an All-Star Babe Ruth baseball pitcher and avid skier, to his teenage years in Cameron Park where he continued his love for sports at Marina Middle School and Oak Ridge High School. While baseball, football, and skiing were a big part of his life, Joe also found his passion with Rugby and played an instrumental part in founding the “Oak Ridge Rugby Club” (now known as the “Mother Lode Rugby Club”). As a guy who always lived and loved with a huge smile and great passion, it should come as no surprise that Joe met his soulmate while in junior high school. Brandy and Joe would eventually marry on July 19, 2003. Wasting no time, the newlyweds welcomed their first child the following year with the arrival of Chase Michael. Twenty-two months later they celebrated the birth of their amazing daughter, Cailyn Jo. Always the family man, Joe’s pride was apparent to all and spending time with Brandy and their two children brought him the most joy. Joe passed along his passion for sports by coaching many youth teams including soccer, baseball, rugby and football. This not only had a big impact on his own children but for so many other kids in the community he loved. If you didn’t see him on the sidelines there was little doubt he could be found on his boat with a fishing pole in hand and friends laughing loudly by his side, or in his well-known man cave with the best “garage talk” in town. Joe’s professional career started in the title industry but after many years of pushing paper he made the decision to follow in his grandfather's footsteps towards law enforcement. In January 2007, Joe attended Yuba College where he earned his P.O.S.T. Basic Police Academy certification. Shortly after college, he applied and was accepted into the California Highway Patrol Academy where Joe endured 28 weeks of rigorous training. This was not an easy task, but he knew he found his calling. On May 15, 2009, Joseph Edward Boberg proudly earned his badge along with 173 other Officers from CTC IV - 2008. Joe began his assignment at the Monterey CHP and subsequently transferred to the Napa Area office with a final transfer to the San Andreas Office one year later. Throughout our lives we all meet someone whose presence is felt in every room they enter and Joe was definitely that guy. His warm smile and intoxicating personality made an impact on all of his fellow officers. While building a strong and lifelong bond with the Department he loved, the San Andreas Area office would be his end of watch. Joe is survived and forever loved by his wife of 18 years Brandy; Son, Chase (17); Daughter, Cailyn (15); Mother, Joanna and Father, Michael; Brother, Jeffrey; Niece, Audrey; Mother-in- Law, Aileen; and Father-in-law, Lee. Loved ones that cleared the path and no doubt waiting for him with welcome arms are his Brother, Thomas; Grandmother, Barbara B.; Grandfather Robert; Grandmother, Barbara B.; Grandfather, Thomas. Joe is an irreplaceable figure that will be greatly missed by his family, friends, and the entire CHP family. Each of us are blessed to have known him with our lives becoming far better because of it. Joe, you will continue to make us laugh and will be forever loved. WE LOVE YOU!

Today we announce the passing of Officer Joseph Edward Boberg. Son to Joanna Jurgens and Michael Boberg, husband to Brandy Boberg and father to Chase and Cailyn. Born on October 31, 1978, in Carson City Nevada, Joe lived his life in and around... View Obituary & Service Information

The family of Joseph Edward Boberg created this Life Tributes page to make it easy to share your memories.

Today we announce the passing of Officer Joseph Edward Boberg....