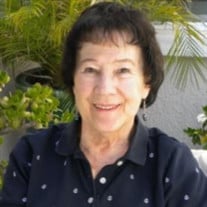 Judy passed away on September 20, 2021, after struggling with health issues for several years. She was born in Columbus, Ohio on October 28, 1929, to Courtland S. Griswold and Alice K. Lersch. Judy attended Oakwood High School in Dayton, Ohio and graduated from Oberlin College in 1952. Upon graduation, she married Everett Lynn Partridge and over the next eight years they had five children. Lynn’s career as a Unitarian minister required their moving from Ohio to Michigan and then to New York where they built a new church in Rockland County. The loss of their oldest son, Jeffrey Partridge, due to a tragic accident when he was only seven years old, was a major blow to the family. Ultimately Judy and Lynn divorced. Judy remarried in 1979 to David Hawkins and they enjoyed 42 years together. Judy and David moved from New York to San Francisco, then to San Rafael, and in 1997, to El Dorado Hills. Judy is survived by her husband, David Hawkins; her sister Polly Joan; and Judy’s four children: Douglas Partridge (Lisa Bookstein), Priscilla Partridge (David Kikuchi), Wendy Crowe (Eric), and Laura Arnaudo (Les). She has eight grandchildren and six great grandchildren. Judy loved being near water and going for walks on ocean beaches. She was devoted to family, traveling, dogs, reading, and singing. Judy joined the Winifred Baker Chorale in Marin and sang at many concerts including a performance at Carnegie Hall in New York City and concert tours to France, England, Scotland and Ireland. Judy and David also traveled extensively internationally and throughout the U.S. Judy’s career included teaching both grade school and at a Head Start pre-school. She became a social worker and specialized in adoption placement for the Rockland County Social Services. After the move to California, she worked as an employment specialist and as the office manager for their homeowner’s association. Judy was a CASA volunteer in Marin. She served on a Grand Jury there and on two Grand Juries in El Dorado County. Judy was loved by her family and friends and will be missed by all who knew her. A celebration of life will be arranged.

The family of Judith Lee Griswold created this Life Tributes page to make it easy to share your memories.