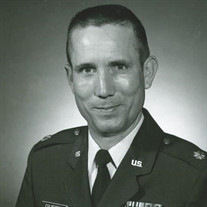 Julius Lamar Culpepper was born in Bogalusa, Louisiana on February 27, 1937. He earned his Bachelor’s Degree in Music at Southwestern Louisiana College. Prior to earning his degree, he entered Officer Training School and completed a two year enlistment (1964) with the United States Army. Subsequently, he joined the United States Air Force and retired in 1981, achieving the rank of Major. While serving in the Air Force, Lamar received a number of awards. He was especially proud of being named Air Force Outstanding Supply Officer in 1967 while stationed in Korat, Thailand. Lamar served as a missile launch officer and helped launch a United States Air Force Minuteman III intercontinental ballistic missile from Vandenberg Air Force Base in Lompoc, California. Captain Culpepper traveled to Vandenberg from his home station at Minot Air Force Base, North Dakota, for the mission. The launch was one in a series of operational testing launches conducted by the Strategic Air Command (SAC). The missile, selected at random from those on alert at Minot, was transported-with its maintenance and launch crew-to Vandenberg. The crews operated from the Vandenberg control center where they monitored the missile in an alert status. When the launch message was received from SAC headquarters, the crews reacted, launching the missile as they would from their home base in combat operation. Lamar was a faithful member of the Holy Trinity Parish, where he was a founding member of the church’s first choir. For many years, during daily mass service, he often played the guitar and bass in addition to singing in the choir. He is survived by his wife, Maria, married for 54 years and nephews, Joe, Steve, and Rick of Bogalusa. He is preceded in death by parents Rex and Bertha Culpepper and by brothers James and J. Linton.

Julius Lamar Culpepper was born in Bogalusa, Louisiana on February 27, 1937. He earned his Bachelor&#8217;s Degree in Music at Southwestern Louisiana College. Prior to earning his degree, he entered Officer Training School and completed a two... View Obituary & Service Information

The family of Julius Lamar Culpepper created this Life Tributes page to make it easy to share your memories.

Julius Lamar Culpepper was born in Bogalusa, Louisiana on February...