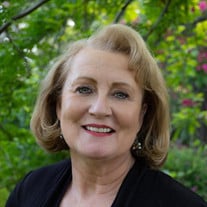 KAREN RAE COBABE Surrounded by her loved ones, Karen Rae Cobabe, after fighting a courageous battle with Alzheimer’s disease, passed away peacefully in her home on July 2, 2021. Karen was born on July 25, 1952, in American Falls Idaho to Eva and Sylvester Eldredge. Her father said she was born with red hair down to the middle of her back (he proudly claimed that was his doing) and a fiery temperament to match (which he wearily admitted Karen inherited from her mom). Karen was a mischievous child and had an impish eye for any situation. If there was trouble to be found, Karen would be at the center of it. And in a home of six girls and one boy—there was no shortage of opportunities to cause trouble. Karen would often recruit one of her siblings to help with her schemes—thereafter feigning innocence and allowing the duped sibling to take the fall for the chaos Karen caused. Despite the whirlwind that was Karen--her sisters were, and still are, her best friends. Karen called them her angels on earth. Karen’s family moved frequently during her childhood which taught Karen how to make friends quickly. During her high school years in southern California, Karen met her lifelong partner in crime, Daryl Leroy Cobabe. Daryl was smitten with the fiery redhead from nearly the moment they met. It was love at first sight. They were married right out of high school at the young age of 18. Karen and Daryl wasted no time and started their family. Karen would frequently affirm that her greatest accomplishment in life was that she had 10 amazing children—and she didn’t kill any of them when they were teenagers—but it was a close thing. Karen would never admit to which child tested her patience the most—and each of her kids confidently affirm that it must have been someone other than themselves. Jeff, Jennifer, Patricia, Greg, Phillip, Heather, Matthew, Christa, Christopher, and Brenton were the joy of Karen’s life. Already feeling immensely blessed, Karen’s love for her family only increased with the birth of each grandchild. She doted on each one of them and her grandchildren knew that had Grandma wrapped around their fingers. Karen’s children would often remark that Karen would let her grandchildren get away with things that they would have been punished for as a child—at which point Karen would give them a level stare and tell them to “hush”. Karen currently has forty-four grandchildren (with two more on the way) and one great-grandchild. Karen’s home frequently rang with joy, music and laughter. If you had an aversion to loud conversation punctuated by occasional explosions of laughter, Karen’s home was not the place for you. Karen opened her home to numerous other people who needed somewhere to stay. It was not unusual for nieces, nephews, friends and even strangers to find temporary refuge—and love—in Karen’s home. Karen’s generosity of spirit even guided her choice of career. She felt called to work with children. Karen was a student care supervisor for over twenty years. She looked forward to going to work, believing she was a second mother to hundreds of other children while their parents were at work. Karen was fond of books and adventure. She was a musician. She played the piano, directed choirs and required each of her children to learn an instrument. Her passion for music often ignited a lifelong love of music in others. For someone with such an overflowing, boisterous spirit, it seems paradoxical that her favorite drink was warm, flat, Dr. Pepper—but such it was. Karen was a devoted member of The Church of Jesus Christ of Latter-Day Saints. Karen loves and worships her Savior Jesus Christ. The gospel was, and remains, her guiding star. Karen embodies the eternal truth of “Families are Forever.” We will miss her terribly, but share in her faith that someday, through the love and Grace of our Savior Jesus Christ, we will be reunited in the bonds of happiness and love.

KAREN RAE COBABE Surrounded by her loved ones, Karen Rae Cobabe, after fighting a courageous battle with Alzheimer&#8217;s disease, passed away peacefully in her home on July 2, 2021. Karen was born on July 25, 1952, in American Falls Idaho... View Obituary & Service Information

The family of Karen Rae Cobabe created this Life Tributes page to make it easy to share your memories.