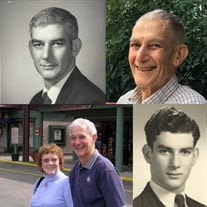 Kenneth Estey Curewitz was born on February 13, 1929 in Boston, Massachusetts and died from Alzheimer’s disease in Cameron Park, California on September 5th, 2017. His wife Midge (Barbara Hughes), parents, Israel and Marion (Politsky) Curewitz, older sister Claire (Curewitz) Costello and younger brother Karl Curewitz preceded him in death. He is survived by children John McGuigan and wife Johanna of Eastham, MA, Michael Curewitz and wife Laura of Port Arthur, TX, son Kenny and wife Pam of Cameron Park, CA along with grandchildren Danielle, Alexandra of California and Justin, Megan, and Robert of Texas, along with several nieces and nephews. Ken grew up in Brookline, MA graduating from Brookline High School. He served in the U.S. Army as an honor guard for General Douglas MacArthur in Tokyo, Japan. He graduated from Brown University in Providence, RI with a Bachelor’s degree in Mathematics. He was a computer pioneer who worked as a civilian with the Army Corps of Engineers, the Army Ordinance Corps, at established high-tech companies including Honeywell, Raytheon, as well as a founder and president of Devonshire Computer Corporation in 1969. He earned a U.S. Patent for an invention at Honeywell. He and his wife Midge raised their family in Framingham, MA in a handful of homes in the town. Ken was an athlete whose father taught him how to play handball at the Boston YMCA where he won many city and regional championships in the 1960’s. He was a bowler who scored a perfect 300 score in 1967. His passion for golf was highlighted by a hole-in-one in the 1990’s. Exercising at the gym was a passion that continued throughout his life. Music and singing filled his final years. His beautiful voice and memory of wonderful songs put a smile on so many faces and added cheer to their lives. He was most proud of his family and friends who were the focus and joy of his life. He was a loving and caring human being who made a difference in so many people’s lives. In lieu of flowers, the family would prefer a memorial donation to the Alzheimer’s Association at http://act.alz.org/goto/Kenneth_E_Curewitz Special thanks to the caregivers at Lighthouse Memory Care in Cameron Park who helped make his final year happy and comfortable.

The family of Kenneth E. Curewitz created this Life Tributes page to make it easy to share your memories.