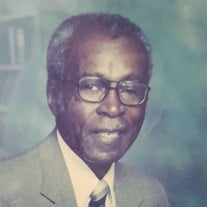 L.C. TURNER May 31, 1916 – December 19, 2019 L. C. Turner was born May 31, 1916, in Oxford, Mississippi. He had strong, persevering roots that extended from his paternal grandparents, Phil and Addie (Certain) Turner, maternal grandparents, Aaron and Catherine (Howard) Parks, and his parents, Zannie and Daisy (Parks) Turner. L.C. was the seventh of 10 children, six boys and four girls, Ella Mae (1906), Willie Silvester (1907), Grover Vander (1909), Katie Mae (1910), Ivan (1912), Zannie Verleycue (1913), Daisy Elisabee (1917), Cassie Bean (1919) and Carl Aaron, (1921). L.C. was the last surviving member of his siblings. When L.C. was a small child, his parents moved the family to seek a better life in St. Louis, Missouri, after a brief stay in Sikeston, Missouri. As an adult L.C., his brothers, and their father, had long, successful careers working for Wagner Electric, one of St. Louis’s most prominent manufacturers of electric motors and small appliances. In his commitment to work and social justice, L.C. rose to the ranks of supervisor and became a union steward making him one of the first African Americans to represent black workers at Wagner Electric. In addition to his full-time job, he had a lucrative business as an interior decorator, painting and wall papering homes and commercial buildings. He continued as a painter far after his retirement from Wagner and in fact, continued painting until he was in his mid-80's. L.C. was a handsome man of high fashion and beamed of elegance and grace no matter the environment. Thus, L.C. captured the eye of Mary Ella Whittington who had moved from Little Rock, Arkansas to St. Louis Missouri. On June 19, 1937, L.C. and Mary were united in holy matrimony. Demonstrating his desire and commitment to family, L.C. and Mary helped to raise their young nephew Jimmy Henderson after the premature death of L.C.’s oldest sister - Ella-Mae Turner. After 17 years of marriage, in November of 1954, L.C. and Mary were blessed with the birth of their beautiful daughter Mary Charlyn, who they affectionately called Charlyn. Sadly, after thirty- two years of marriage, L.C. lost the love of his life - Mary to cancer on July 12, 1969. Consequently, with a growing adolescent daughter, he knew that he had to persevere for Charlyn's well-being and strength. L.C. was a true inspiration to his daughter encouraging her to attend church and complete her undergraduate and master’s degree. In May 1978, Charlyn married and moved to California. Approximately one year later, L.C. joined his expanded family where his adorable grandchildren entered his life, Anthony (1982) Adrienne (1983) and Aaron (1988). With the passing of years, L.C. was an integral part in caring for and raising them, often picking them up from school, taking them shopping, and teaching them to drive at the early age of 11. He inspired them to work hard, and to pursue their education and lifelong dreams. Despite his commitment to life in California, L.C. never gave up his St. Louis roots. Every summer he would go "home" to work and be with his siblings, in-laws, nieces, nephews, and friends, as well as to usher at his beloved Antioch Baptist Church - to which he, his wife Mary, and his oldest brother Grover joined after witnessing the baptisms of their children. After residing with his daughter and extended family for more than twenty-eight years, L.C. continued to grow into his later years of life and in August 2007, he moved from El Dorado Hills, to The Pines at Placerville Healthcare Center. Known there as “PaPa”, he continued to bring a smile to all he met as he fondly called his wonderful caregivers “Baby.” Despite his failing eyesight, he enjoyed attending church at the Pines on Sunday mornings, praying and listening to the Bible with his friends Sunday and Tore Pearson, eating delicious, pound cake prepared by his daughter and celebrating his fabulous birthday parties; always attended by a host of relatives and friends. On December 19, 2019, at 2:55 p.m. at the age of 103, with his daughter, Mary Charlyn at his bedside, L.C. departed his earthly life and entered the Kingdom of Heaven. He leaves to cherish his memory, his beloved daughter Mary Charlyn Lawrence-Jones; her husband, William S. Jones, grandchildren Anthony, Adrienne, and Aaron Lawrence, and a host of nieces, nephews, extended family, friends, and caregivers. A link to the livestream of the memorial services for L.C. Turner can be found at the following link https://www.youtube.com/watch?v=fapuHka9XTo

The family of L.C. Turner created this Life Tributes page to make it easy to share your memories.