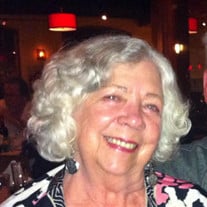 LaVerle Ann Clark, nee Alexander, passed away peacefully on 12/31/19 surrounded by loved ones. She was eighty-six years old. Born in Andersonville, Michigan to Charles Fred and Winifred Etta Alexander, she was the youngest of six children. At the age of 10 her family moved to California, settling in Oroville, where she graduated from Oroville Union High School in 1951. During her high school years, her outgoing personality made her a class favorite, participating in sports and playing the piano in the school’s orchestra. Following high school, LaVerle and several classmates moved to Sacramento where she spent three years working as a secretary for the California State Department of Architecture. She returned to Michigan working as a secretary for General Motors. While in Michigan she became engaged to Ralph Eugene Clark, an Oroville High School graduate, who was stationed in Atlantic City. Upon discharge from the Navy, they returned to Oroville and were married in 1955. They had two children, Ralph II and Stephanie. Years later they moved to Sacramento where Ralph was employed by Aerojet. They divorced and LaVerle went back to school to become a Licensed Vocational Nurse. She worked in the Admitting Department at Mercy General Hospital for seventeen years, retiring as a supervisor. LaVerle loved to gamble, play scrabble and family card games. In her later years she played a lot of Bridge with several groups of wonderful ladies. In 1997, through friends she reunited with the love of her life, Ronald Hayes. They spent many years traveling and enjoying family gatherings. LaVerle is survived by Ronald Hayes, her son Ralph Clark (Julie), daughter Stephanie Guerra (Dennis), five grandchildren (Jody, Matt, Alexandra, Nicole and Mikaela) and six great grandchildren (Vanessa, Kevin, Adrianna, Gabe, Norah and Kai) No Service to be held.

LaVerle Ann Clark, nee Alexander, passed away peacefully on 12/31/19 surrounded by loved ones. She was eighty-six years old. Born in Andersonville, Michigan to Charles Fred and Winifred Etta Alexander, she was the youngest of six children. At... View Obituary & Service Information

The family of LaVerle A. Clark created this Life Tributes page to make it easy to share your memories.