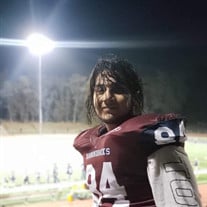 Lawrence Mark Lopez, 16, passed away in his home town of Grizzly Flats CA on August 30th 2020. Lawrence was born in Sacramento, CA October 7th, 2003, and moved to Grizzly Flats at 6 months of age. He attended Pioneer Elementary, Mountain Creek Middle School, and Union Mine High School where he was a junior at his time of passing. He was in his second season as a varsity football Diamondback and was an active music student. Lawrence is survived by his parents (Joseph Lopez, Gloria Lopez) and is the youngest of four siblings (Gloria Josephine Lopez, Joseph Richard Lopez Jr., Anthony Lorenzo Lopez). He will be missed by his nieces Olivia Elizabeth Rosa and Malia Naomi Jackson, his nana Josephine Mary Lopez, and his grandfather Joseph Mark Lopez. Lawrence was preceded in death by his grandmother Gloria Jean Jimenez whom he loved very much. Lawrence loved his family, and his family included his pets, friends, schoolmates, and football teammates. He was an athletic, hard working, thrill seeking, loving, high spirited, and loyal young man with a tireless sense of humor. He always extended his strengths, laughter, and virtues to all who were willing to receive his presence and follow his example. Those who knew him never fail to mention laughter, leadership, and a fearless demand for respect. He was highly active in the community and will be missed by many, especially his brothers and sister. Lawrence was called home by our Lord God while doing one of the many things he loved to do — riding his dirt bike. He will be missed dearly by all who knew him.

The family of Lawrence Mark Lopez created this Life Tributes page to make it easy to share your memories.

Lawrence Mark Lopez, 16, passed away in his home town of Grizzly...