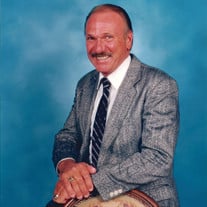 Lester Robert Thayer, Sr. Lester Robert Thayer, Sr. was born on March 8, 1936 in Newark, New Jersey to John Wilson and Geraldine Marie Thayer. After a long illness of Alzheimers, he passed away peacefully on June 3, 2017, he was 81 years old. Lester spent most of his life living in San Mateo County where he and his family ran Miracle Auto Painting, Inc., a Franchise Company from 1953 until 2009. He moved to Placerville, California in 1998 upon retiring and pursued many of his hobbies and interest. Les was a loving, kind, generous, and hard working man. He loved to restore old automobiles, garden, play with his dogs, sing, dance and travel. He had a marvelous sense of humor and if he teased you, it meant that he liked you a lot. He was a member of the American Cancer Societies, Relay For Life team and was an active member in the Placerville Elks Lodge #1712 in Shingle Springs, CA where he helped build the Lodge and was the Exalted Ruler in 2004. He was preceded in death by his parents, brother John Thayer, Jr. and son Lester Thayer, Jr. He is survived by his wife of thirty one years, Kris Thayer, brother, Jerry Thayer (Kay), his sons Frank Thayer and Don Thayer, 8 grandchildren, and several nieces and nephews. He was loved by many family members and friends. He referred to his wife, Kris, as his Princess and he was her King. His brother Jerry gave a simple toast on their wedding day, he said “May the love we see on both of their faces last a lifetime.” It lasted Les's lifetime. Lester believed in the Golden Rule of life and he believed in Jesus Christ as his personal Savior. It's comforting to know that he is at peace in his heavenly home with Jesus, his family and friends there that he loved so much. Love Never Fails, 1st Corinthians 13:8 Funeral services are scheduled for Friday, June 16 at 11:00 am at Green Valley Mortuary in Rescue, CA, Casket burial at Westwood Hills Cemetary, Placerville, CA at 12:30 pm, and a Celebration of Life at the Elks Lodge 1712 in Shingle Springs at 1:30 pm. Donations can be made in his memory to the Alzheimer's Association and the Elks National Foundation.

The family of Lester Robert Thayer Sr. created this Life Tributes page to make it easy to share your memories.