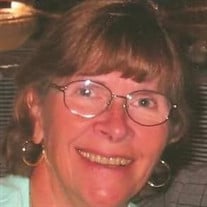 Linda Boyer, 76, passed away on August 27, at home in El Dorado Hills. She was the beloved spouse of Norm Boyer. They shared 41 wonderful years of marriage together. Born in Chicago, she was the daughter of William and Joy. She attended public schools in Chicago, graduating from Schurz High, and attending Illinois Wesleyan University in Bloomington. She literally married the boy next door when she wed George Anselmo in Chicago. They moved to California after graduation for her husband's work. They have two beloved children Teri and Tom. That marriage ended and several years later she married Norm Boyer, a perfect marriage that lasted the rest of her life. She instantly became the mother of 5 as she became step mother to Heather, Amy and Erin. She was a great mother, not only to her children but their friends as well. Her home was the gathering place for all the kids after school. After her first marriage ended she went to work as an office manager for a growing dental practice and later was a partner in a consulting business that helped medical and dental offices improve their business practices. She lived in the Four Season's active adult community for the last 15 years where she expanded her already extensive list of friends. She was one of the co-founders of the Mad Hatters knitting group (later known as the Glad Hatters) and was on the steering committee for the Four Season's Travel Club. Helped organize the very first 4th of July Celebration in the Community. She and Norm loved to travel and her favorite destination was always Kauai. She was the ultimate Chicago Cubs fan, having learned to keep score as a child at Wrigley Field with her Nana. Living to see the Cubs win the World Series in 2016 (after 108 years of trying) was one of her favorite moments. She enjoyed traveling to Arizona for baseball Spring Training with dear friends for a number of years. Linda had many loves the most important of which were: her friends, penguins, the Chicago Cubs, her children, her grandchildren, and Norm. Linda valiantly battled Parkinson's disease for more than 18 years and had done well until the past 2 years. In the last days of her life she was surrounded by family and close friends who were able to say their goodbyes. A special thanks to her wonderful care givers: Awanda, Judie, and Precious. And especially to Susie J. who is now a member of the family after caring for Linda for nearly 2 years. She is survived by her husband, Norm, daughter Teri (Scott), Son Tom (Aimee), step daughters Heather (Mike), Amy (Andy), Erin (Jason), Grandchildren Samantha, Anthony, Brittany, Gianna, Xander, Nicholas, Kaitlyn, and Collin. As well as a number of cousins, nieces, nephews, and dear friends. She was predeceased by her parents and her sister Judy. The Celebration of Linda's Life will be held on September 21, at noon at the Lodge at Four Seasons, 3186 Four Seasons Drive El Dorado Hills. A lunch of some of her favorite food will be served. In lieu of flowers a donation may be made to the Parkinson's Association of Northern California, the Michael J. Fox Foundation for Parkinson's Research, or a charity of your choice.

Linda Boyer, 76, passed away on August 27, at home in El Dorado Hills. She was the beloved spouse of Norm Boyer. They shared 41 wonderful years of marriage together. Born in Chicago, she was the daughter of William and Joy. She attended public... View Obituary & Service Information

The family of Linda J. Boyer created this Life Tributes page to make it easy to share your memories.