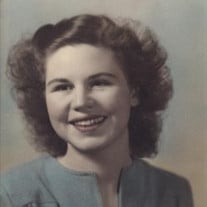 Beautiful, strong, and amazing until the end, Genevieve Linder Cahill (Gen), born July 15, 1922 (age 93), peacefully went home with the angels on December 4, 2015 in Folsom, CA at Folsom Care Center. Gen was a resident of California for over 90 years. She was raised in San Jose, CA where she married the love of her life, Vic, at the age of 21. After he served in World War II, they moved to San Francisco, CA to raise their family. Vic passed away suddenly and left Gen a widow at the age of 49. Gen and Jerome (Jerry) Cahill, also widowed, eventually married and lived in San Francisco and then moved to Cameron Park, CA, where they resided until he passed after 15 years of marriage. Gen battled Bulbar Polio when she was in her late twenties and at the time had two young children.  In 1996, she suffered a hemorrhagic stroke​, became paralyzed, ​ and ​despite that spent many years working diligently in therapy.  Gen was a true survivor with a fighting spirit, positive attitude, and love of life. She was a great example of strength, beauty, and grace. Gen was an avid reader, a dog lover extraordinaire (also had a soft spot for cats, horses, and elephants), adored sitting in the sun, and was a woman of classic style who appreciated the finer things in life. She resided in assisted living for many years where she was very active and was up in her wheelchair until the last week. She was known for having a great sense of humor and for always treating everyone with dignity and respect. Despite the many health issues she had endured over the years, she was not a complainer and if you asked her how she felt up to the very end, she would say “wonderful” or “lovely.” Gen was preceded in death by her sister, Charlene Simmons; parents Jenny and Joseph Berg, husband Victor S. Barlogio (1973), husband Jerome J. Cahill (1989) – both WWII veterans. She is survived by her loving family; Children: Noel Barlogio, Victor Barlogio (Kerry), Gina Crosariol (Dave); Grandchildren: Faith Wolfram, Veronica Wolfram, Conor Wolfram (Erin), John Roybal, Joseph Crosariol (Lauren), Dominic Crosariol, Vic Crosariol (Katharine); and Great Grandchildren: Mary and Henry Crosariol, Vaughn Wolfram; Jerome’s Children: Dan (Claudia) Cahill, Deirdre (Mark) Hansen and families.  A special thank you to her caregivers who were with her ​at the end of her journey. Services will be held Tuesday, December 29, 2015 at 11:00 a.m. at St. John the Baptist Catholic Church at 307 Montrose Drive in Folsom, CA - reception to follow. Burial will be private in Salinas, CA, where Gen will rest in peace with her beloved Vic. PDF Printable Version

Beautiful, strong, and amazing until the end, Genevieve Linder Cahill (Gen), born July 15, 1922 (age 93), peacefully went home with the angels on December 4, 2015 in Folsom, CA at Folsom Care Center. Gen was a resident of California for over... View Obituary & Service Information

The family of Genevieve Linder Cahill created this Life Tributes page to make it easy to share your memories.

Beautiful, strong, and amazing until the end, Genevieve Linder...