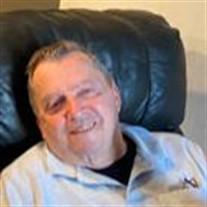 Lowell Howard Tilton, age 78, is now in heaven with the Lord and his loved ones as of February 24, 2022. He was born December 21, 1943, in Lake City, South Carolina to proud parents Lowell Eugine & Bernice Tilton. He was born in a house, only later to find out that it was not that easy to obtain a birth certificate. He grew up living in South Carolina with his 3 sisters, Joan, Rosie, Patsy and brother Fred. He joined the US Navy after high school and served our great country from 1964-1968. He met his wife Linda Louise Brunkhorst and after only a few dates, they married on December 27, 1966. They raised their family in Sacramento County where he accepted Christ as his Lord and Savior and was baptized in 1975. Howard touched many lives during his 78 years while here on earth. He was a devoted Christian, and strongly believed in our Lord! Making sure he witnessed to whomever crossed his path to let them know that Jesus loved them. Fun Facts about Howard. He absolutely loved: roller skating, dancing, signing, whistling, fishing, driving across the country to see his family, pretending to be a mannequin to scare people, writing poems (hopeless romantic) and GOD! Some of his favorites: color green, eating boiled peanuts, BBQ, fried chicken, banana sandwiches, and of course his sweets. He made everyone feel special by asking, really caring, about how they were doing and making sure we were all ok. If we weren't, he would say a prayer for us. He was “one of a kind!” He is proceeded in death by his dad, mom, brother, sister, family & friends. He is survived by his wife Linda, daughter Beverly Craig (Monty), son Richard Tilton (Jennifer), daughter Belva Powell (Wes); grandchildren Mat Craig (Kat), Tayler Aubrey (Luke), Logan, Peyton, Kalea & Leilani; great grandchildren Hayden, Henry, Brynlee, Bennett, Addelyn, Archer; sisters Joan, Patsy and numerous nieces, nephews, church family and friends. He loved his family and friends and he made sure to tell you every time he would see you. We know he is up in heaven dancing with his mama and hopefully not getting into too much trouble with his good buddy Tom. Thank you, Lord, for sharing him with us. Love and miss you so! We'll see you soon dad!! John 15:12-13 This is my commandment: Love each other in the same way I have loved you. There is no greater love than to lay down one's life for one's friend.

Lowell Howard Tilton, age 78, is now in heaven with the Lord and his loved ones as of February 24, 2022. He was born December 21, 1943, in Lake City, South Carolina to proud parents Lowell Eugine & Bernice Tilton. He was born in a house,... View Obituary & Service Information

The family of Lowell Howard Tilton created this Life Tributes page to make it easy to share your memories.

Lowell Howard Tilton, age 78, is now in heaven with the Lord...