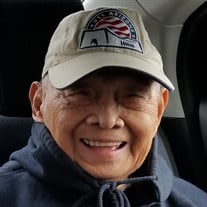 Lucio Lastrollo Prades, age 90, passed away at his home in El Dorado Hills, CA on Sunday, March 17, 2019. Lucio was born in Nabua in the province of Camarines Sur, Philippines, to Regino and Aquilina Prades on September 28, 1928 and was the youngest of six children. He spent his teen and young adult life working on his parent’s farm, where he learned to cultivate the land, which produced rice, fruits, and vegetables. He married Idie Guevara Filio on January 11, 1960 in Manila, the capital of the Philippines. He served in the United States Navy during the Vietnam War and was employed as a culinary specialist aboard the USS Tortuga, USS Antietam, USS San Jose, and the USS Forrestal. He retired from the Navy after 20 years and continued working as a chef at the MCAS Miramar military base in San Diego, California until he finally retired at age 65. In retirement, he enjoyed gardening, reading, cooking, playing tennis, and going to the casino. To his family, Lucio will be remembered as a quiet, patient, and generous soul who always made sure that everyone around him was well fed. To his canine companions, Nikki and Snickers, he will be remembered as their best friend. Lucio will be greatly missed by all who knew him. He is survived by his loving wife of 58 years, Idie Filio Prades, of El Dorado Hills, CA; five children, Robert Prades (wife, Myrna) of San Diego, CA, Arnold Prades (wife, Konnie) of Melbourne, Australia, Louis Prades (wife, Consuelo) of Austin, Texas, Norma Huff (husband, William) of San Diego, CA, and Nancy Prevost (husband, Charles) of El Dorado Hills, CA; grandsons, Robert Jr., Jacob, Kenny, Michael, Jonathon, and Eric; and granddaughters, Sophia, Dannielle, Sophie, Alana, and Raine; and great grandchildren. He is predeceased by his siblings, Maria, Feliciana, Modesto, Victoria, and Aurelia. Funeral services and vigil will be held at Green Valley Mortuary in Folsom, CA from 5:30 p.m. to 7:30 p.m. on Thursday, March 28, 2019 with Deacon Bill of St. John the Baptist Catholic Church, officiating. Burial with full military honors will occur at the Sacramento Valley National Cemetery on Friday, March 29, 2019, at 12:30 p.m.

Lucio Lastrollo Prades, age 90, passed away at his home in El Dorado Hills, CA on Sunday, March 17, 2019. Lucio was born in Nabua in the province of Camarines Sur, Philippines, to Regino and Aquilina Prades on September 28, 1928 and was the... View Obituary & Service Information

The family of Lucio L. Prades created this Life Tributes page to make it easy to share your memories.

Lucio Lastrollo Prades, age 90, passed away at his home in El...