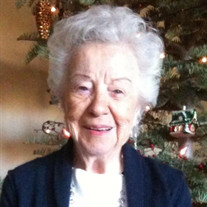 It is with great sadness that the family of Lulua Blanche Blank announces that she passed away on January 8, 2021 at the age of 101. Lulua was born in 1919, in Jefferson, Pennsylvania to parents James (Doc) and Blanche, where she was the youngest of three girls. Lulua was married to Norwood Blank, who passed away in 2009. Also deceased is her son Frank, who was killed in action in the Vietnam War at the age of 23. Also deceased are her two sisters: Mary Newcomer and Lorraine Waters. Lulua is survived by her daughter Diana Slater and her son-in-law Bob Slater, granddaughters Kimberly Daboub and Carolyn Wesling and grandson-in-law Drew Wesling. She is also survived by seven great-granddaughters: Natasha, Olivia, Daniella, Sophia, Hailey, Katie and Annika. Lulua loved to tell stories about her childhood where she grew up the daughter of a country doctor and they lived in “the big house” atop a hill near the Monongahela River where she also had her very own playhouse and pool. Her stories made her childhood sound magical. Her great-granddaughters loved them so much that they recorded her storytelling when the family was together for Thanksgiving in 2020. This recording will be cherished by the family forever. After high school Lulua went to business college where she learned typing, shorthand and other office skills. These skills served her well and she was able to always find work both in Pennsylvania at a Clairton elementary school and after the move to California she secured a position with Bank of America where she worked for many years. When Norwood retired, and they moved to Hemet, CA., she had a job working in a boutique where she sold ladies clothing and accessories. She loved this job and wished she had thought about working with fashion earlier in her career. As anyone that knows her can attest, Lulua knew how to put an outfit together and accessorize: always looking sharp. Lulua and Norwood started their family in the same town where she grew up: Elrama, Pa., a small town outside Pittsburg where Norwood worked in the Steel Industry as a welder and maintenance mechanic. Lulua and Frank lived with her mother during WWII while Norwood was serving in the Army in France. In 1959 with the steel industry slowing and the sunshine beckoning, Lulua, Norwood and Diana moved to California. Frank joined the Marine Corps just prior to this. They made several moves once they landed in California, living first in West Hollywood, then Lakewood, then finally Garden Grove where they lived for many years while Norwood worked at Monsanto in Long Beach. After retirement they moved to Hemet, California near Palm Springs. When they moved to Hemet it was predominately a retirement community. Their community had a clubhouse where Lulua and Norwood loved to attend dinner dances. They also had a standing Bridge game every Saturday night with their friends. Her nickname while living in Hemet was Roadrunner: a testament to her endless energy. Also, as a couple, Lulua and Norwood loved to help neighbors. Norwood was up on roof tops at the age of 80+ fixing leaks, Lulua, also at the age of 80+ was doing sewing for people both in the neighborhood and in nursing homes, taking in their clothes if they lost weight, hemming pants, etc. They were also gracious hosts and would treat visiting family and friends like royalty. Lulua had a way that just made everyone love her. She was generous to a fault, had a great sense of humor with an infectious laugh and enthusiasm for life. Even at the age of 100+ whenever family and friends were over for a celebration she liked to put on her sweater with the sequenced Mickey Mouse on front. That’s how we knew she was ready to party. Lulua was very young looking, and acting, for a 101-year-old person and as such she loved to tell people her age and watch their surprised reaction. Lulua is a perfect example of the people that made up the Greatest Generation. She was a gift to her family and friends and will be missed. A limb has fallen from the family tree that says grieve not for me. Remember the best times, the laughter, the song the good life I lived while I was strong.

It is with great sadness that the family of Lulua Blanche Blank announces that she passed away on January 8, 2021 at the age of 101. Lulua was born in 1919, in Jefferson, Pennsylvania to parents James (Doc) and Blanche, where she was the youngest... View Obituary & Service Information

The family of Lulua Blanch Blank created this Life Tributes page to make it easy to share your memories.

It is with great sadness that the family of Lulua Blanche Blank...