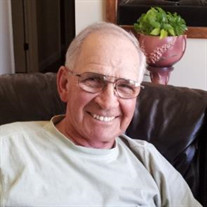 M. Thayne Goff (1939 – 2016) Surrounded by his family, M. Thayne Goff passed peacefully at home on April 6th after a courageous battle with cancer at the age of 76. Thayne was born on December 28th, 1939 in Lewiston, Utah to his parents Milton and Velma Goff. Thayne served in the United States Marines from 1958 – 1965. On October 7, 1960, he married Lynda Coleman. Although they later divorced, they had two beautiful children, David and Camille. Thayne married his loving wife, Marilyn Goff, on April 13th, 1976. Thayne is survived by his wife Marilyn; his first wife, Lynda; his children David Goff (Mark Jenkins), Camille Goff Frankos, Jason Goff (Nicole), Nicole Goff Nielsen (Scott) and Heidi Goff Andra (Trent); and his siblings Karen, Ruth, Debra, and Stephen. Thayne loved spending time with his eleven grandchildren Chloe, Marren, Mason, Kennedy, Simon, Cameron, Ellie, Kate, William, Courtney and Owen, and he greatly enjoyed his final days with them. He is preceded in death by his sister, Marilyn Goff Wheelwright, his brother-in-law, Rex Bingham, and his sweet parents Milton and Velma Goff. Marilyn and Thayne moved to El Dorado County from Denver, Colorado in 1985 and immediately became active in the community. Thayne was an avid fly fisherman. He spent many hours fishing the Upper Sacramento River and tying flies with his friends and brother-in-law Rex Bingham. He was a man of extreme faith. He served numerous callings within the Church of Jesus Christ Latter-day Saints, and he loved attending the Sacramento Temple. Thayne retired in August 2015 from the County of Sacramento where he was an inspector with the Department of Public Works. Thayne first beat stomach and bladder cancer in 1996 with the assistance and support of his doctors at Kaiser Permanente. After the return of cancer in 2014, he showed extreme courage and strength as he continued to be the foundation for those fortunate to be touched by his life. Thayne will be greatly missed but forever remembered as a wonderful, sweet, loyal and strong husband, father, brother and son. Funeral Services will be held on Tuesday, April 12th at 1:00 p.m. at the Church of Jesus Christ of Latter-day Saints at 3431 Hacienda Road in Cameron Park. A viewing from 11:30- 12:30 p.m. will be held prior for those wishing to pay their final respects. In lieu of flowers, the family asks that you donate to the American Cancer Society in hopes of advancing the fight against cancer. https://donate.cancer.org/index?campaign=search&gclid=CNfOgtyi_8sCFZSCaQodo8gOdA

M. Thayne Goff (1939 &#8211; 2016) Surrounded by his family, M. Thayne Goff passed peacefully at home on April 6th after a courageous battle with cancer at the age of 76. Thayne was born on December 28th, 1939 in Lewiston, Utah to his parents... View Obituary & Service Information

The family of M. Thayne Goff created this Life Tributes page to make it easy to share your memories.