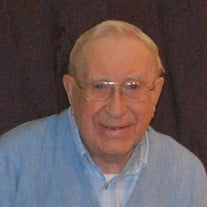 Mahlon (“Bill”) Joseph Bilodeau passed away peacefully in his home on February 14, 2019, at the age of 96, surrounded by family. Mahlon was the fifth of five children of Arthur G. Bilodeau and Alma Berg Bilodeau of Chetek, Wisconsin. He grew up on his parent’s dairy farm and attended school in nearby Cameron, WI. He graduated from Cameron High School class of 1939 and went on to business college in Minneapolis. He found a job as an accountant with the Barron County Electric Cooperative in Barron, WI before joining the US Army in 1942. Mahlon served with the IX Corps at Fort Lewis, WA, Camp Young, CA, and Camp McCain, MS. In 1943 he was transferred to the XXI Corps at Camp Polk, LA and Camp Robinson, AK. In November 1943, he married Pearalee Tandberg in Little Rock, AK. A year later, the XXI Corps left for Europe, moving from England to France and then Germany. After Germany surrendered he was assigned to the VI Corps and served until January 1946, when he returned to the US. After the war, Mahlon and Pearalee moved to Minneapolis and started their family, which grew to six children: David (Koko), Ginger (Roger Gramm), Bill (Sally), Patty (David Barosso), Bruce (Deborah), and Gloria (Rich Nystrom). Mahlon first worked as an accountant, and later as a salesman for Allan Office Machines and Burroughs Corporation in Minneapolis and Colorado Springs. In 1963 the family moved to Concord, California where he worked as a banking equipment salesman for LeFebure Company until he retired in 1986. In 1978, after the kids were grown, Mahlon and Pearalee moved to Vacaville, CA. After retirement, they sold their home in Vacaville and traveled the US in a motorhome, while their house in Shingle Springs, CA was being built. In 1988, they moved into their new house, continued to enjoy short RV trips, and watched their family grow as their kids married and 13 grandchildren, and 18 great grandchildren, were born. Mahlon’s loving wife, Pearalee passed away in November 2012, shortly after their 69th wedding anniversary. Mahlon continued to live alone in his house in Shingle Springs, receiving visits from his children every weekend, with help from Visiting Angels and Meals On Wheels. A funeral mass and celebration of Mahlon’s life is scheduled for Thursday, March 28 at 11:00 AM, at Holy Trinity Catholic Church, 3111 Tierra de Dios Drive, El Dorado Hills, CA. His and Pearalee’s ashes will be interred at the Sacramento Valley National Cemetery in Dixon, CA on Friday, March 29, at 10:00 AM. We are grateful for the care offered by Marshall Hospital staff, Visiting Angels, and Snowline Hospice. Donations in Mahlon’s memory may be sent to Snowline Hospice and Meals On Wheels.

Mahlon (&#8220;Bill&#8221;) Joseph Bilodeau passed away peacefully in his home on February 14, 2019, at the age of 96, surrounded by family. Mahlon was the fifth of five children of Arthur G. Bilodeau and Alma Berg Bilodeau of Chetek,... View Obituary & Service Information

The family of Mahlon Joseph Bilodeau created this Life Tributes page to make it easy to share your memories.

Mahlon (“Bill”) Joseph Bilodeau passed away peacefully in his...