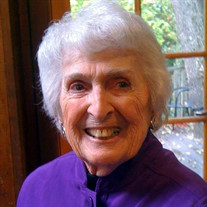 Marion O. Cole, 98, died peacefully in her sleep, May 27, 2016 at Gold Country Assisted Living in Placerville, CA. Marion was born September 13, 1917 in Chicago, IL, the first child of Roy M. O’Donnell and Isabelle O’Donnell. She graduated from Nazareth Academy in LaGrange, Illinois, in 1935. She attended junior college and went to work at Western Electric, Inc. In 1941, she married Charles E. Cole (“Red”) and they were married 48 years before his death in 1990. Marion and Red lived in Clarendon Hills, IL, Los Altos, CA and Incline Village, NV during their marriage. They enjoyed many friends traveling, playing bridge and dancing. Marion lived in Lake Tahoe and Desert Hot Springs, CA and in 1997 moved to Walnut Creek and Pleasant Hill, where she lived a happy and active life with many old and new friends. She later lived with her daughter Patricia and family in Orinda and Placerville. Marion is survived by her children, Michael Cole, Ellen Kinamon (Robert,) and Patricia Crowley (Thomas,) and nine grandchildren, eleven great-grandchildren (+ one on the way), one great-great-grand daughter and many nieces and nephews. Marion was preceded in death by her husband, and her oldest daughter Marion Mitchell. The family wishes to thank the staff of Gold Country Assisted Living and Snowline Hospice for their gentle, loving care of Marion and her family. Also we wish to thank St. Patrick’s Catholic Church for their spiritual support of Marion. A private interment service will be held at Queen of Heaven Cemetery in Lafayette, CA at a later date.

The family of Marion Cole created this Life Tributes page to make it easy to share your memories.