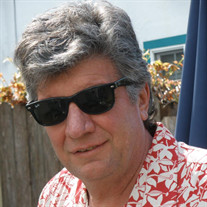 Martin James Miele passed away August 7, 2020 in Placerville, California, where he resided, at the age of 69. Marty was born April 27, 1951 in Detroit, Michigan to Armando Miele and Joann (Carnaghi) Miele. He grew up in St Clair Shores, Michigan. On March 23, 1990 he married Kathryn Van Sickle in Santa Rosa, California. Marty’s kind and generous nature was highlighted by his keen sense of humor and insightful intelligence. While his innate humor found an outlet among family and friends, his intelligence led to advanced academic and career accomplishments. He earned two bachelor degrees, one from Wayne State University and one from San Francisco State University, and a master’s degree in geophysics from San Diego State University. Marty was a California state licensed geophysicist and geologist for 35 years. As a highly regarded and respected senior geophysicist he supervised projects throughout the United States and occasionally abroad. He was the author and co-author of many professional papers and published scientific studies. Marty had many interests during his life. His one overriding passion was his wife and extended family. His other passions included running, woodworking, playing guitar, listening to jazz and classic rock music, and sharing his knowledge of the natural world during hikes in the mountains of California. In the tradition of his Italian heritage--in which he took much pride--Marty made some excellent Italian dishes. No one could forget his spaghetti and meatballs. He spent many happy hours cheering his favorite sports teams: the Detroit Tigers, the Detroit Lions, the Detroit Redwings and his beloved San Francisco 49ers. Martin was preceded in death by his father Armando Miele. He is survived by his wife of 30 years, Kathryn Miele, his mother Joann Miele, his sister Janice (Miele) and Jim LaBroski and their daughter, his niece, Kelly (Mike) Urban. Burial will be in the Franklin Township Cemetery, Tipton, Michigan following a family memorial to be held later this year.

Martin James Miele passed away August 7, 2020 in Placerville, California, where he resided, at the age of 69. Marty was born April 27, 1951 in Detroit, Michigan to Armando Miele and Joann (Carnaghi) Miele. He grew up in St Clair Shores, Michigan.... View Obituary & Service Information

The family of Martin James Miele created this Life Tributes page to make it easy to share your memories.