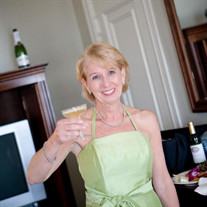 Mary Theresa Muse, February 2, 1950 - May 5, 2020 Mary died peacefully at home surrounded by her husband and seven children. Beloved wife of 48 years of William Fisher, and daughter of the late Robert and Mary Beatty Muse. Cherished mother of the seven Muse-Fishers, Julie and husband David Giordano of West Roxbury, MA, Mary Katherine (Katie) and husband David Boyaj of Roslindale, MA, Michael and wife Lauren (Dunlap) of Sacramento, Annie and husband Aaron Bellamy of El Dorado Hills, John and wife Sally (Darby) of Berkeley, Christopher and girlfriend Katrina Lund of El Dorado Hills, and Andrew (Scooter) of El Dorado Hills. Adored “Yaya” to her eleven grandchildren Jack, Michael, Ella, Claire, Maggie, Marlena, Nora, William, Margot, Katherine and James. Dear sister of Michael J., Esq. of Wellesley, Robert F. Jr., Esq. of Washington, DC, Honorable Christopher J., of Hingham, Stephen P. of Paris, France, Dr. John P. of Milton, Dr. Daniel A. of Canton, James A. of Mattapoisett, Julie A. Stanley Esq., of Hingham, Patricia E. Muse Esq., of Boston and the late Peter J. Muse Esq. of Milton. She is also survived by many loving nieces, nephews, in-laws, and countless friends. Born in Boston, Massachusetts and raised in the Town of Brookline, Mary was a proud graduate of Newton Country Day School and Wheaton College (Norton, MA). Mary moved to California in 1973 with her husband Bill, and what began as a one year opportunity became one of the great adventures of their lives. Together with Mary’s father “Big Bob,” the couple built Pacific States Development Corporation, which became the prominent developer of El Dorado Hills during the 1970s and early 1980s. El Dorado Hills became Mary’s home. After graduating from McGeorge School of Law in Sacramento in 1978, Mary began a fulfilling legal career. Her professional life centered around family law, both as a Superior Court Staff Attorney and Superior Court Commissioner for El Dorado County from 1987-1996 and then with her private family law practice. She was grateful for her work and found fulfillment from helping others. Mary was passionate about supporting the local public school system. She first served on the Buckeye Union School Board and then on the El Dorado Union High School Board for 17 years. A dedicated public servant, Mary was also past president of the El Dorado County Bar Association, Board Member of New Morning Youth and Family Counseling, Mother Teresa Maternity Home, Marshall Hospital, and Western Sierra Bank, and an early member of the American Leadership Forum (ALF). Mary had an amazing ability to balance her professional responsibilities with her role as a wife and a mother of seven children. Mary also cared deeply about her friends, who are too numerous to list. Mary exhibited a fun-loving spirit, always up for a new adventure whether it be with local trips to Apple Hill, Lake Tahoe, or San Francisco, or on travels around the world. Mary managed to give her children both roots and wings, creating strong family traditions and memories, and helping to foster curiosity about the world, an understanding of the importance of civic responsibility and community involvement, as well as love and empathy for others. Mary was incredibly kind and her generosity was abundant. Her husband and children are heartbroken by their loss but know that her legacy will live on in all of them and Mary’s grandchildren. Mary died as a result of complications from cancer. Donations in her memory may be made to the El Dorado Hills Endowment of the El Dorado Community Foundation ( https://ssl.charityweb.net/eldoradocf/ ) or the Mother Teresa Maternity Home of El Dorado County ( https://motherteresamaternityhome.com/ ). The family encourages anyone with a memory of Mary to please share it at https://www.marytmuse.com/ . A Celebration of Mary’s Life will be held at a later time and her family looks forward to acknowledging and remembering her remarkable life with family and friends.

The family of Mary Theresa Muse created this Life Tributes page to make it easy to share your memories.