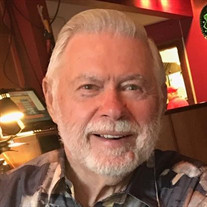 A beloved man, husband, father, grandfather, and friend, Mathew Wroblewski at the age of 79 passed into Jesus’ arms on June 7th. Mat was born in Niagara Falls, New York and after graduating from high school, enlisted in the Marine Corp in 1957. Because he graduated top of his class in a military radio school, he was able to choose where he would serve and he chose (of all places), Hawaii!! Once discharged in 1960 in San Francisco, he stayed with his sister, Joan Thomas in Sunnyvale and didn’t take long to decide that he’d like to live in California. A year later he met Nancy. The following year they married in Nancy’s home town of Weed, CA. They celebrated their 57th anniversary 12 days prior to Mat’s passing. Mat’s other surviving sister, Judy O’Clair and brother Jerome Wroblewski also live in California. After buying their first home and having 3 sons, Mat’s work experience with Hewlett Packard, Lockheed, Sylvania and others, he decided to start his own electronic manufacturing company from home. In 1974 he bought the necessary equipment to make the parts he would sell and after some “dumpster diving” he established his customer base for his products and Precision Contacts, Inc. (PCI) was started. In 1988 he bought a company in Buffalo, New York, that would help in the progress of PCI. After years of growth, PCI moved from Sunnyvale to El Dorado Hills in the winter of 1990 bringing 12 employees and his 3 sons, all of whom made the company grow even more. Mat retired in 2010 and a few years later found a pastime he loved as a STAR Volunteer for the El Dorado County Sheriff’s Dept. He enjoyed promoting their Neighborhood Watch program throughout the county. Another passion of Mat’s was playing pool with friends from the Four Seasons Community. They won many a trophy! Mat’s 11 grandchildren, 2 great grandchildren, daughters-in-law, sons Dean and Douglas (Steven passed away in 2005 at the age of 42) and his wife Nancy, will find it difficult to not have Mat’s support and opinion when tough times come up and decisions must be made without his imput. He had great business sense, people skills and determination. Mat enjoyed life and loved all those who surrounded him. WE LOVE YOU, MAT! To view the livestream of Mathew's service please click on the following link. https://youtu.be/LKwGgk9BEVc

A beloved man, husband, father, grandfather, and friend, Mathew Wroblewski at the age of 79 passed into Jesus&#8217; arms on June 7th. Mat was born in Niagara Falls, New York and after graduating from high school, enlisted in the Marine Corp... View Obituary & Service Information

The family of Mathew John Wroblewski, Jr. created this Life Tributes page to make it easy to share your memories.