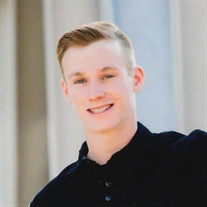 Michael Ross Manson was born on November 7th, 2000 to Erik and Tina Manson in Folsom, Ca. He was a stand out from day one. He had the most people they had ever seen in a hospital waiting for him to be born and then of course he had to enter this world with a bang, emergency c-section. He was pure magic from the minute he entered our lives. Our beautiful red headed baby boy with those crystal blue eyes. He didn’t stay a baby long, by 8 months he was walking, at 18 months he could ride a scooter and swim, by 2 he was riding a bike without training wheels and by 3 years old he was already snowboarding. At this same time Michael gained this lifelong best friend when his brother Mitchell was born, from that day forward they had each other’s back. They never had that typical sibling rivalry, it was friendship and respect from the beginning. Michael had his first dirt bike at 5 and absolutely blew people away with the ease he rode with. His athletic abilities never stopped amazing us. He excelled at baseball, making the All Star Team every year. He played soccer and football and excelled at both. Michael even tried his hand at basketball. He also played Volleyball and nailed that too. Eventually, he gave it all up to pursue snowboarding full time. He joined the Sierra at Tahoe competition snowboarding team. Soon, he was taking first or second in every competition, earning an invite in multiple disciplines to Nationals three years in a row. In the summer, you could find Michael wakeboarding, cliff jumping, camping and fishing. He never stopped moving. He did more things in one day than the average person did in a week. By the time he was 16, his competition snowboarding career had ended due to injury but another chapter soon began. In the summer of 2017, he brought a girl home named Marchella. Before he brought her in to meet me, he pulled me aside and said “mom, I really like this one so be nice”. I knew that was it, he had found his match. She was beautiful, smart and funny and she adored our son. In the summer of 2018 Michael met some retired Marines on a camping trip. He connected with them on a level we hadn’t seen. Soon, he was researching military life. He did some research and soul searching and eventually came to the decision to join the United States Marine Corps. I remember the night he told me. He said “mom, I want to be part of something bigger than myself”. He graduated from Visions in Education in June of 2019. The following September he left for Boot Camp and earned the Title of US Marine in December of 2019.. We were beyond proud but being proud of him wasn’t a new feeling to us. He made us proud every single day he was on this earth. I never missed an opportunity to tell Michael how amazing I thought he was and how he made my world complete. He was the brightest light I’ve ever known. He came home after Boot Camp and In true Michael fashion he asked me for his Nana’s ring and proposed to the love of his life, Marchella. She said yes and I had 3 days to plan a wedding before he had to leave for SOI school. They were married on January 19th, 2020 in a beautiful ceremony in South Lake Tahoe, one of their favorite places. Marchella loved my son the way I had always hoped a woman would love my son. She loved him unconditionally and recognized the magnificent creature that he was. He loved his wife and his family fiercely and he never missed a chance to tell us. Texting and calling every day. He was a loyal friend to many. Michael was so special, he was truly one of a kind. He lit up any room he walked into. His personality and love of life was contagious. He was excelling as a Marine and on track to be promoted to squad leader after deployment. Michael had so much more to offer this world. Michael made an impact on literally every person he ever came in contact with. His dad and I were so incredibly proud to be his parents. He brought a light to our lives that words cannot explain. You left us way too soon son. Our lives will never be the same. We love you so very much our sweet Michael. To the moon and back my sweet boy. -Mom, Dad and Mitchell *Reception to Follow at the Manson Family Home 7030 Kentfield Drive, Cameron Park. "In lieu of Flowers please consider a donation in Michael's name to honoringourfallen.org" The livestream of the funeral service can be seen at the following YouTube link https://youtu.be/bdzn9ejkfJ0

Michael Ross Manson was born on November 7th, 2000 to Erik and Tina Manson in Folsom, Ca. He was a stand out from day one. He had the most people they had ever seen in a hospital waiting for him to be born and then of course he had to enter... View Obituary & Service Information

The family of Michael Ross Manson created this Life Tributes page to make it easy to share your memories.