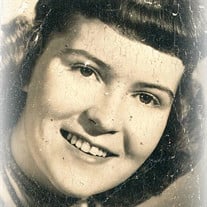 Mildred E. Anderson October 26, 1935 October 3, 2020 I am the resurrection and the life. The one who believes in me will live, even though they die; John 11:25 Millie was born on October 26, 1935, to Hilda and Fred Tossava in Hancock, Michigan. She attended grade and high school in Hancock. In her Junior year, 1952, she met Dick Anderson and they were wed on May 28, l955 at St. Peter & St. Paul’s Lutheran Church in Hancock. They had three children Andy, Janet and Leif, and were married for 65 years. Dick was an USAF pilot for 20 years and had many missions that took him to "faraway places with strange sounding names", sometimes for weeks at a time. Millie manned the home front during those times. In 1973, Millie took a job with the State of California, Department of Conservation. She was a receptionist in the Division of Resource Conservation, a secretary to the Resource Conservation Commission, and an Executive Secretary to the State Geologist in the Division of Mines and Geology. In 1985, Millie became Executive Secretary to the Chief of the Division of Oil and Gas. Dick also worked for the State of California after retiring from the USAF in 1974, and in December 1986, they both retired from State service. Millie and Dick enjoyed many years of retirement together. Summers were spent living on their boat docked in Sheboygan, WI. Days of sport fishing for salmon and trout were enjoyed. Several couples from LOTH visited us on our boat and joined us to enjoy a unique day of fishing on Lake Michigan. In the fall, Millie and Dick hunted deer in the mountain country of NE Utah. Millie bagged a buck every year they hunted; she was an excellent shooter and seldom missed her target! Millie's rifle was a Remington 700 BDL 30-06 caliber. Millie was an avid counted cross stitch enthusiast. She had the patience of Job and spent many long hours stitching beautiful pictures. In later years they purchased a motor home and made annual trips to their childhood homes in Wisconsin and the Upper Peninsula of Michigan. Millie is survived by her husband (Dick ), daughter Jan Deakle, son and daughter-in-law Leif and Lisa Anderson, and six grandchildren, April, Rudi, Eli, Danny, Briana, Matthew and great-grandson Ayden and great-granddaughter Makinzy, sister-in-law Nancy J Anderson of Seymour WI, as well as many other extended family and caring friends. Their son Andy preceded her in death in 1978. Viewing will take place at Green Valley Mortuary in Rescue, CA from 9:30 AM to 11:30 AM on Tuesday, October 13. Private burial will follow at East Lawn Sierra Hills Memorial Park in Sacramento, CA at 1:30 PM. A Memorial Service will take place at Light of the Hills Lutheran Church in Cameron Park, CA on Saturday, October 17, at 11:00 AM, with a reception to follow.

The family of Mildred "Millie" Eleanor Anderson created this Life Tributes page to make it easy to share your memories.