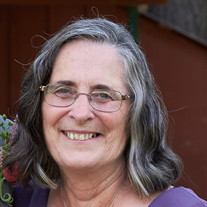 Nancy Randolph Mosbacher was born Oct. 21, 1948 in Placerville, Calif. She was the second of three children born to William James Randolph and Chloris Pauline Randolph. She lived the vast majority of her life in Placerville and held deep and meaningful ties to the local community, its natural beauty and history. During her formative years, she spent considerable time interacting with community members at her parents’ namesake business on Main Street, Randolph Jewelers. Nancy was a lifelong learner whose thirst for knowledge and aptitude for linguistics were apparent to all who knew her. She graduated from El Dorado High School in 1966 and was a member of Girls League, Math Club and CSF, where she served as secretary. El Dorado High School is also where many of her lifelong friendships blossomed. During her teenage years she was an active and highly respected member of International Order of the Rainbow for Girls (“Rainbow Girls”), a Masonic youth service organization. Nancy held several high-ranking positions within the organization, earned the Grand Cross of Color Award in 1967, and was California’s Grand Representative to the Oklahoma Grand Assembly. After graduating El Dorado High School, she attended the University of California, Davis, where fueled her love for literature by working part-time at the UC Davis library. She later transferred to California State University, Sacramento and earned her bachelor of arts in English. She returned to Sacramento State college to earn her elementary and secondary teaching credentials. Nancy met her first husband at UC Davis and was married to him for three years. During this time, she began her self-proclaimed “favorite job” of being a mom, when she had her daughter Andrea in 1969. In 1974 Nancy married Frank Mosbacher. To support Frank’s career advancement at the U.S. Forest Service, they moved from Placerville to Ojai, Calif. where she was a substitute teacher and Brownie leader. They then moved to Lone Pine, Calif. Where Nancy worked part-time “more for fun than money” at a local restaurant and enjoyed interacting with people and learning their stories. Nancy also volunteered at the Interagency Visitor Center in Lone Pine and, along with Frank, was co-editor of the Western Interpreters Association Magazine. In 1978, Nancy and Frank’s first son, Howard, was born in Lone Pine. In 1980 Nancy and Frank returned to Placerville where they had three more healthy children: Michelle (1981), Brent (1985) and Alex (1989). For many years Nancy committed all her time and energy to raising her family — shuttling kids to sports practices, facilitating school projects, cooking meals and generously instilling a range of life-anchoring values. Nancy and Frank divorced in 2001. Nancy’s employment in Placerville was varied. She taught summer school and did a lot of substitute teaching. She spent more than eight years working part-time at the local college bookstore and nearly 13 years working full-time at Placerville Hardware, before retiring in 2015. Main Street was a very special place to Nancy. She loved to dine at its restaurants, patronize its store and most importantly, connect with its people. Nancy had a deep connection to nature and took the time to find beauty in places that others may overlook. She loved poetry and for several years participated in a local poetry club, "Tuesday at Two." She was loving, nurturing, kind, smart, funny and curious. Nancy was preceded in death by her parents William and Chloris Randolph and brother James Randolph. She is survived by her children, their spouses, and seven beautiful grandchildren: Andrea Appleton (Wylie); Maia and Howard Mosbacher (Carson and Brooke); Jack and Michelle Schenk (Shelby and Sienna); Carli and Brent Mosbacher (Drake and Hadley) and Darlene and Alex Mosbacher. She is also survived by her former husband Frank Mosbacher and sister, Janis Arnell. Nancy’s memorial service and celebration of life will be held on Friday, July 16, 2021 at 3 p.m. at Fausel Ranch in Placerville. Food will be served and friends will be encouraged to share memories. (4881 Hanks Exchange Road, Placerville).

Nancy Randolph Mosbacher was born Oct. 21, 1948 in Placerville, Calif. She was the second of three children born to William James Randolph and Chloris Pauline Randolph. She lived the vast majority of her life in Placerville and held deep and... View Obituary & Service Information

The family of Nancy Randolph Mosbacher created this Life Tributes page to make it easy to share your memories.