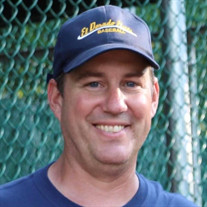 Neil Randolph Schumacher, a wonderful husband and amazing father, passed away on April 10, 2022, after a seven-year battle with cancer that displayed the tenacity with which he lived his life. Neil was born on June 28, 1970 in Redlands, California, where he lived throughout his childhood impacting all who met him with his humble exuberance. As a child, Neil was part of a lively household with siblings Nick, Teri and Dana and a host of pets. Neil loved spending time outdoors with friends, playing ball at the local elementary school and teaching his friends how to be world-class belly floppers. From elementary school through high school, Neil, aka “The Schu”, connected with a group of friends who remained extremely close throughout the remainder of his life. He served as a representative of his senior class in student government, and balanced academics with the basketball and, following in the footsteps of his brother Nick, baseball teams. Neil was popular and known for his kind smile, good humor and occasional moments of brilliant zaniness. The Schumachers were an athletic family, and Neil found success playing basketball and baseball as well. On the hardcourt, his soft touch and tenacious defense were sources of pride and propelled him to numerous pick-up games and friendships beyond high school and to San Diego and beyond. At UC Riverside, Neil played with the rugby club despite having a significantly lighter-than-average frame for a rugby player. Neil was always up for a competition, from impromptu football games to darts with his father to lighthearted dance-offs with friends. One of his great loves was to coach his sons’ sports teams, where he could spend time with his children while also imparting his knowledge and passion for sports with others. After graduating from UC Riverside, Neil went into the insurance industry where he worked in and managed claims departments. While living and working in San Diego, Neil met the love of his life, Dana (nee Shuck) Schumacher, at the Catamaran on Mission Bay. They married in 2001 and remained by each other’s sides throughout, including the moment of Neil’s passing at home in El Dorado Hills. Neil was quick to opine on matters, from sports to driving directions and to what you happened to be thinking about at the time. But he always did it with a glimmer in his eye and with kindness in his heart. Neil was fiercely loyal to his family and friends and always there when someone needed support or guidance. He leaves behind a legacy of people with lives made more colorful and rewarding for having spent time with him. Neil was preceded in death by his father Chuck, mother Carolyn and sister Teri. Neil is survived by his wife Dana, sons Nathan and Owen, brother Nick, sister Dana, nephews, Seth, Jake, Russel, Cole, Brett and Brycen, and niece Lindsay. Services are being held on June 4th, 3:00 pm at the Legacy Center at Green Valley. A reception will follow immediately after the service. Come and share stories, laughter, memories, and a toast to Neil’s extraordinary life. All are welcome. Address: 3004 Alexandrite Drive, Rescue CA 95672. Please let us know you are coming by texting 909.227.5478 by May 31st.

Neil Randolph Schumacher, a wonderful husband and amazing father, passed away on April 10, 2022, after a seven-year battle with cancer that displayed the tenacity with which he lived his life. Neil was born on June 28, 1970 in Redlands, California,... View Obituary & Service Information

The family of Neil Randolph Schumacher created this Life Tributes page to make it easy to share your memories.