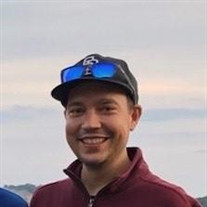 Nicholas Donald Perata was born in Sacramento, California on December 29, 1992. After graduating from Ponderosa High School, between 2011 – 2016 Nick attended San Diego State University, earning his Bachelor’s Degree in Civil Engineering. Throughout his professional career, he worked as a Project Engineer building schools and hospitals for various companies, including Swinerton, Landmark, and RQ Construction. Nick was a happy go lucky positive guy, although at times was a goofball, never hesitated to live life to the fullest. He always loved adventurous and thrilling activities, whether it was camping, fishing, hiking Half Dome in Yosemite, snowboarding, sky diving, attending multi-day music festivals, and most of all, waiting in line for hours to ride a one minute roller coaster. Nick also had a passion and love for golf, never turning down an opportunity to perfect his game by playing 18 holes with family or friends. He fulfilled his passion further by volunteering and working numerous PGA Tournaments throughout the U.S., and abroad. It was always a thrill to see Nick on TV as he walked the course alongside professional golfers. Nick also had a tremendous love for architecture. From a very young age, using LEGO’s, Lincoln Logs, Rokenbok, and Roller Coaster Tycoon, Nick became a master builder of small scaled masterpieces. Some of which include building the Star Wars Millennium Falcon, Empire State Building, Statue of Liberty, and probably his most passionate project, rebuilding, detail for detail, a simulated Disneyland theme park. Nick loved Disneyland so much, during his third year of college, he was awarded an internship to learn and assist in the design and construction of Disneyland rides. He was thrilled to learn the secrets of Disneyland, and even more so, to share what he learned with friends and family. Nick also enjoyed cooking his favorite recipes for friends and family, specifically tacos, shrimp scampi, and salmon. Last but not least, Nick always found joy and happiness in goofing around with his friends, three brothers, and beloved dog Brody. Nick’s life was cut short at the young age of 27. He is survived by his parents Stephen and Ingrid, his brothers Alex, Michael, and Logan, his grandparent’s Paula Perata and the late Donald Perata, Gerald Rowley and the late Lia Rowley, and numerous aunts, uncles, and cousins. In lieu of flowers, you may honor Nick and donate to the Sacramento Food Bank. https://www.sacramentofoodbank.org/. Private Family Services have been scheduled at Green Valley Mortuary.

The family of Nicholas Donald Perata created this Life Tributes page to make it easy to share your memories.

Nicholas Donald Perata was born in Sacramento, California on...