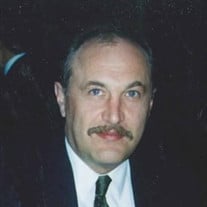 Oleg Victorovich Popovitch passed away on August 19, 2021 at 61 years of age in his adopted community of Cameron Park, CA. He is survived by his wife Kathy, son Gregory and Gregory’s partner Cierra and their daughter Octavia, and his parents residing in Moldova. Oleg and I were second cousins – our grandmothers were sisters. Fate separated us until 1990 when Oleg was able to visit my wife, Darcy, and me in San Francisco. Our grandmothers were refugees, traveling together with their children (our mothers-to-be) in Eastern Europe during World War II. At one point they became separated and then never saw each other again. My grandmother ended up in the United States, and Oleg’s grandmother ended up in the Moldavian SSR (now called Moldova) – an autonomous region controlled by the then USSR. Oleg grew up under the umbrella of communism. In 1990, Oleg was able to visit the US. He flew into New York and then took a bus to San Francisco. He knew no English. After visiting for a few months, we bonded our family relationship and became close friends. He wanted to come live in the US, and we decided to assist him in that endeavor. His tourist visa was expiring, so he had to return to Moldavia. After a few months, he was able to return to the US. He lived with us and relentlessly worked on his English. While he became quite proficient with both the complex grammar and nuances of the English language, he never lost his heavy accent – always a target of poking fun at. His education in electrical engineering and perseverance in learning English paid off and he landed his first job – as an electrical designer at FW Associates in San Francisco. He quickly advanced to electrical engineering status and became a licensed engineer in the State of California. Later, he worked at Gayner Engineers, Glumac, Mazzeti Assoc, and again at FW. He was very good at his profession designing complex electrical systems for large and essential facilities such as hospitals. He was residing in the US when Communism disintegrated in Eastern Europe and his country of Moldavia became independent and changed its name to Moldova. He did not want to return. At a New Year’s Celebration in San Francisco, a single girl caught his eye. Even before he was introduced to her, he told me “I am going to marry that girl.” In 1994, Kathy and Oleg were engaged to be married. They were married in 1995. Gregory was born in 1997. Oleg and Kathy lived in Pacifica, then El Granada, and then finally moved to Cameron Park in 2007. Oleg always knew how to have a good time. He loved all kinds of jokes and remembered them all as well as delivering them with flair and well-timed punchlines. He was especially fond of Russian political/ communist/socialist jokes. For example: Q. How do you deal with mice infestation in the Kremlin? A. Put up a sign saying “collective farm.” Then half of the mice will starve and the rest will run away! Or….A new arrival to the Gulag is asked by fellow inmates: “What were you given 10 years for?” – “For nothing!” – “Don’t lie. Everyone knows “for nothing” is 3 years!” We will all fondly remember Oleg… Nick Mironov

Oleg Victorovich Popovitch passed away on August 19, 2021 at 61 years of age in his adopted community of Cameron Park, CA. He is survived by his wife Kathy, son Gregory and Gregory&#8217;s partner Cierra and their daughter Octavia, and his parents... View Obituary & Service Information

The family of Oleg Popovitch created this Life Tributes page to make it easy to share your memories.