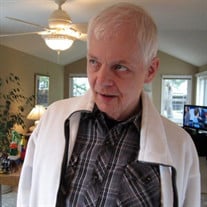 Paul David Hackett, born April 16, 1958 in Ventura, California, was called Home on Friday, July 16, 2021 in Sacramento, California, following a long and brave battle with Parkinsonism. Paul touched many lives with his forever boyish playfulness and twinkling eyes. A pioneer in his day, Paul was a one-in-ten-thousand child born with autism. Throughout his life, he helped pave more positive pathways for inclusion, better supported housing options and reminding all around him that individuals with autism are uniquely wonderful people. After living his first decade in Ventura, Paul lived in Vienna and other locations in Fairfax County, Virginia, and in his early forties, he moved back to California, living for a few years in Clayton before moving to Paradise and then to Sacramento following the Camp Fire. Paul resided at home until his early twenties and lived joyfully. He appreciated wonderful, home-cooked meals, playing with puzzles and toys, listening to stories read aloud, dancing to music, splashing in pools and riding horses at camp. As a little boy, Paul rode his two-wheel bike, climbed and enjoyed the outdoors. As he grew up, he took long daily walks with his dad. He loved the song Puff the Magic Dragon and collected stuffed dragons. Paul’s special needs strengthened the character of his family, which was exemplified by activism efforts to create awareness and opportunities for the betterment of all individuals with developmental disabilities to include state support for opening group homes and transitioning care to a person-centered approach. Paul’s father Owen Hackett was a founding parent member and past president of the Autism Society of America. Together with his wife, Paul’s mom M. Anne Hackett, they helped author an important document on how to spot and prevent abuse, which was published in Virginia. Even during challenging times, Paul could evoke a smile with his love of “B” consonant word strings, delight in opening presents and eating birthday cake and the tender way he would lift your hand to gently touch his cheek. His rare embrace was pure magic. Paul’s life reminds us to take a breath and gently appreciate our loved ones and this Earth we share. Paul is preceded in death by his father Owen Frederick Hackett and is survived by his mother M. Anne Curtis Hackett of Walnut Creek, his brother Steven Curtis Hackett and his wife Mary of Santa Rosa, his sister Karin Joyce Machusic and her husband John of Clayton, as well as his nieces Caity Hackett and Allie Hackett Camacho and her husband Travis of Oakland; nephew Grey Hackett of Oakland and niece Krissa Machusic of Walnut Creek. Paul’s graveside service is scheduled at 11 am on Friday, July 23 at the Green Valley Mortuary and Cemetery in Rescue, CA.

The family of Paul David Hackett created this Life Tributes page to make it easy to share your memories.