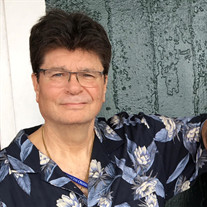 On Friday, January 22, 2021, Paul Manginelli, devoted father and husband, passed away at the age of 68. He was born on August 3, 1952, in Manhattan, New York, to his mother, Carmela “Millie” Acheronti and his father, Paul Manginelli. The family moved to California when Paul was a teenager. He first worked in real estate, transitioning to finance in 1981. Paul worked as a stock broker and financial consultant for 37 years. On February 14, 1981, Paul married his wife, Brenda Ann Brown, whom he was wed for almost 39 years. Together, Paul and Brenda raised their two daughters, Teena and Sara, and their animal menagerie, in El Dorado county. Paul had the bluest eyes, the most luxurious hair, and a contagious laugh. As a fiery Italian, he was affectionate and caring with everyone he met. He spent most of his free time with his family, including his dogs, cats, chickens, llamas, and more. He forever loved watching the New York Yankees, going on cruises and visiting their Oregon condo with his wife, golfing with his youngest daughter, floating in his pool with his eldest daughter, and singing along to Elvis radio. Paul was known for his quick wit, goofy charm, and his dedication to his family above all else. Paul was preceded in death by his father, Paul, and his mother, Carmela. He is survived by his wife, Brenda, his two daughters, Teena and Sara, his sister, Lucille, many cousins, nieces, and nephews.

The family of Paul Manginelli Jr. created this Life Tributes page to make it easy to share your memories.