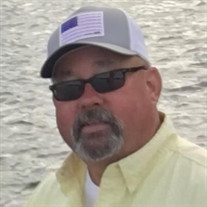 Paul Alfred Nash In Loving Memory May 1960 – January 2022 Surrounded by his loving family, Paul Nash, of El Dorado, passed away on January 31, 2022, at the age of 61. Born in Redwood City, to parents in their late 40’s, Frances and Alfred, Paul was considered a miracle and was nick-named “little-stinker,” a moniker he has held his entire life in one form or another. His infectious grin and sense of humor were traits which he held dear. Paul married Cathy Icenogle in 1987 and they had 2 children. Paul was employed by the County of San Mateo Motor Pool for 10 years where he maintained county vehicles. When he could, he delighted himself in parking the Coroner’s Wagon in front of your house. In 1997 Paul and his family moved to El Dorado County. Paul married Cathy Brenneise-Nutting in 2006. Cathy had 3 children whom Paul accepted as his own. For the past 16 years he was employed by Waste Connection of Placerville, as a driver. Paul really enjoyed and was a big part of all the kid’s sports (motorcycles, football, baseball, basketball, rugby, softball and volleyball). His favorite pastimes were fishing, hunting, shooting, boating, motorcycle riding, 4-Wheeling and NASCAR. He loved to watch westerns and the cooking channels. Paul was a Native Son of The Golden West and a lifetime member of NRA. He loved a good party and good times with family and friends. Paul was very proud of his cooking skills and hospitality, which we all enjoyed. His gruff exterior was a disguise for his teddy-bear soul. He fiercely loved his family and was very proud of all his children. He was first on the spot to a friend in need and generous in his care and opinions. He was someone you could count on no matter when or what time. Paul is survived by his wife Cathy Nash, son Cody Nash (Tiffany), daughter Haley Nash (Erik Brehm), stepson’s Tyler, William and Clayton Nutting, sister Mary Jensen (Chris), sister Rene Biggs, 3 grandchildren June, Maggie and Hadley Nash, niece Erin Jensen, mother-in-law Rita Brenneise. Other family includes: Sally Nash, Penny Swanson, Cindy Schiavone (Matt Duyanovich) & family, Cathy DeRenne (Mark) & family. He was predeceased by his parents Alfred and Frances Nash, brother Richard Nash, brother-in-law David Biggs, nephew Monte Nash, father-in-law Allen Brenneise and brother-in-law Terry Brenneise. A celebration of life will be held on March 12, 2022, 12 - 4 pm at Elks Lodge, Shingle Springs. For additional information go to Greenvalleymortuary.com. “Forever In Our Hearts”

The family of Paul Alfred Nash created this Life Tributes page to make it easy to share your memories.