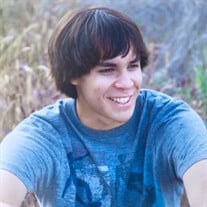 Rhyss Maximo Undajon-Haskell was born on February 11, 1990 in Fairfield, California. His family moved while he was still a baby to Orangevale where he grew up as a child. Rhyss expressed his mechanical interests at an early age. He loved to watch the wheels of his baby stroller spin around. On a trip to Southern California to visit family, he saw his first oil well pump jack and was fascinated. Our family trips to Southern California would now include looking for new oil fields and taking pictures of pump jacks. We discovered one pump jack that was protected by an “attack rooster” and failed to get a good picture. He started to build his own pump jacks and other things out of his K'nex sets: elevators, cranes, science experiments for school projects. In Junior High school he built “battlebots” out of K'nex and let elementary school kids battle with them during a school carnival. Rhyss also loved fish and started with a gold fish in a bowl. Then he started putting his own freshwater tanks together with a pump, filter, an aerator, rocks and then some tetras, neons or ghost shrimp. He loved the equipment almost more than the fish. Along with the pumps came the curiosity with how electricity worked. He would dig holes in the backyard and make fish ponds that had pumps to move the water around. Rhyss grew up with Lake Natoma Park in his backyard. He enjoyed long distance running on the bike trails and the freedom knowing the park would always be there for him. He went on to participate in several Eppie’s Great Races as an iron man. The “Rock Pile” was a spiritual place where he could find peace of mind. There were also rope swings and jumping rocks to let off adolescent steam. Rhyss was an only child and learned to entertain and play by himself. He was shy, unassuming and did not like to be the “center of attention.” He loved cats and always had a kitty by his side growing up. As an adult, he was a private man but a true and loyal friend. Rhyss started school at Twin Lakes Elementary school in Orangevale. He was quiet, but a good student and loved to do experiments for the science fairs. He played some soccer in junior high. Rhyss started to play drums in fifth grade and continued to play and take lessons. He eventually joined Bella Vista High School’s marching band as a snare drum player for the drum line. The drum line gave him a sense of belonging and helped find his place in high school. He loved traveling to the marching brand competitions and hearing the other bands play. He also liked to jam with his cousin Gary when they got the chance, making their special kind of music. Rhyss began to ski in high school and made many ski trips with his buddies during the winter months. Rhyss tried surfing but skiing was his first love. Rhyss’ first car was a four-wheel drive Chevy blazer. He loved that car and drove it everywhere playing Aerosmith’s song “Sweet Emotion.” Since this blazer already had 160,000 miles on it, he got to start working on his own cars. He wanted to be self-reliant and do everything he could by himself. Rhyss attended college at Chico State studying Construction Management. He received his bachelor’s of science degree in December of 2014. In February 2015, he started work for Rodda Electric in Brentwood, California. He eventually became a construction site engineer whose job it was to find out why the low voltage electrons kept breaking out of their fences, Or attempt to read the manufacturer’s mind on how to program a controlled lighting system without the instructions. He loved his work at Rodda Electric but hated having to drive to job sites on a daily basis in the Bay Area traffic. Although Rhyss was serious about his work, there would be moments when jokes or phrases uttered by Beavis & Butthead or characters from “King of the Hill” would creep into the conversation. Rhyss passed away on January 21, 2020 due to unknown causes. He was loved by his family and friends and will be dearly missed. In lieu of sending flowers, donations can be made in his name to the Friends of Lakes Folsom and Natoma at their website: www.folfan.org.

Rhyss Maximo Undajon-Haskell was born on February 11, 1990 in Fairfield, California. His family moved while he was still a baby to Orangevale where he grew up as a child. Rhyss expressed his mechanical interests at an early age. He loved... View Obituary & Service Information

The family of Rhyss Maximo Undajon-Haskell created this Life Tributes page to make it easy to share your memories.