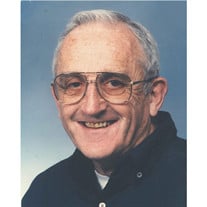 Richard Lee Humphrey August 19, 1930-October 14, 2019 Richard Lee Humphrey, peacefully passed away on October 14, 2019, at his home in Roseville, CA. He is survived by his loving and devoted wife of only 2 ½ years, Diane L. Humphrey, his four sons, eight grandchildren, 2 great grandchildren and 2 step-sons. He was preceded in death by his late wife Vivian L. Humphrey of 58 years. He recently made his home in Shingle Springs, CA. He was born in Yakima, Washington on August 19, 1930 to Arthur and Carolee Humphrey. In 1946, the family moved to Seattle where he met Vivian Rowley who would be his world until her death in 2010. Mr. Humphrey earned a Bachelor’s degree in 1952 in Business, the first college graduate in the Humphrey family, from the University of Washington. Immediately after college, he served on Active Duty as a Lieutenant in the United States Navy during the Korean War as a Deck Officer (Ensign/LT.JG) from 1952-1954 aboard the USS Polaris (AFII). In addition he attended the Harvard Business School for Management Development in 1965. After the war, he, Vivian, and their first child Michael moved back to Seattle where he joined Kaiser Aluminum, the company he would work for the remainder of his career. He worked for Kaiser in Tacoma, New Orleans, and Oakland in a variety of roles. He retired from Kaiser Aluminum and Chemical Co. after 34 years of service. At the time of his retirement he held the position of Corporate Vice President and General Manager of the primary Aluminum Products Division. Upon retirement he was then retained by Kaiser as a Senior Consultant until 1990. After retiring from Kaiser, he and Vivian built their dream house on 20 acres in Shingle Springs, CA where Richard lived until 2017. He loved to travel, he was a high quality furniture maker, photographer, and loved to fish and hike in the Sierras.

The family of Richard Lee Humphrey created this Life Tributes page to make it easy to share your memories.