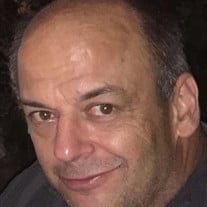 Robert Edwin Blosk January 27, 1959 – January 10, 2019 Santa Rosa, CA formerly of Saratoga, CA ROBERT EDWIN BLOSK, age 59, resident of Santa Rosa, CA, formerly of Saratoga, CA, born January 27, 1959 in Poughkeepsie, NY to Robert T. Blosk and Lois Parkhurst Blosk, passed away by natural causes on January 10, 2019 in Santa Rosa, Ca. He was a graduate of Cal Poly and retired Electrical Engineer with Hewlett Packard and Agilent Technologies. Preceded in death by his Mother, Lois Parkhurst Blosk, his sister, Donna Moyles and his Uncle Bill Curley. Survived by his loving Father, Robert T. Blosk and stepmother, Dale Blosk; his cherished sister, Sharon Blosk and her husband, Bob Cermak; his nieces, Kristine Blosk Kjellsson and Jill Blosk Kjellsson and their Father, Bjorn Kjellsson; his nephews, Mathew Moyles (Crystal) and Kevin Moyles (Erin) and their father, Dan Moyles and their children, Morgan, Jackson & Carter; his Aunt Joan Curley and family (Tom, Kathy, Bill, Michael and their spouses) and his cousins, Mark & Rick Parkhurst and families. He was kind to all. He was a phenomenal handyman and there was nothing he could not fix for himself or others. In retirement, he enjoyed crossword and Sudoku, working with electronics, riding scooters, and flying drones. He loved rock music and playing guitar with his friends. He was multi-talented: rebuilding cars and computers and working on house projects. He always acted with compassion, generosity and integrity. He was loving and playful with a wit and sense of humor that will keep us all smiling. We will miss him dearly. Private services Feb. 16, 2019, please call family for information.

The family of Robert E. Blosk created this Life Tributes page to make it easy to share your memories.