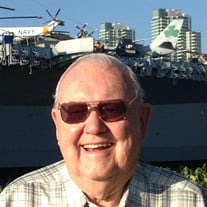 Robert (Bob) was born on July 31, 1924 in Detroit, Michigan. Bob was the only child of Edward and Doris (Thickett) Jarvis. When Bob was 14 years old, he lost his mother to cancer and at 15 his father left him to be cared for by his stepmother, Elizabeth M. Longtin, known to his children as “Grandma Maggie.” Bob was unable to recover from a massive stroke and passed away peacefully on February 11, 2021. Bob is survived by his beautiful wife of 71 years, Dolores (Denison), his two son’s Richard (Beverly), and David (Martina). He also leaves behind 8 grandchildren, Ben (Heather) Kate (Geoff), Lance, Erin, Lindsay (Alex), Joe (Karen), Abbey & Dylan; and 3 great-grandchildren: Amelia, James & Sophia. Bob & Dolores raised their family in Royal Oak & Troy, Michigan before moving to California in 1992 where they joined their son David and his family. It is here, where Bob & Dolores became an extended member of Martina’s family better known as “Pop Jarvis” to Robb, Patrick (Sally), Suzanne (Rick), and so many others. He was known as “Opa” to Ben & Kate, and as “Grandpa Max” to Lance, Erin, all David & Martina’s nieces, nephews and many more. He was “POP” to so many. Bob also leaves behind his nieces and nephews, Cathy, Jim, Bill, Don, Brenda and Laura, as well as his sister-in-law, Marilyn and his God-daughter Linda. Bob had to persevere at a young age. He got his first job at 12 yrs. old delivering the newspaper. From 15-18 yrs. Old, he delivered telegrams for the Western Union. They actually gave him $.15 more if he would sing the telegram, which he tried to do every time. When Bob was 18 yrs. old, he was trained to be an “OD” (outside diameter) Grinder at Excello Corporation in Detroit, Michigan. Bob was drafted at 18 and entered the Navy at 19 years of age. After the Navy he went back to Excello until 1970 when he was laid off, however, Bob finished his career with McPherson Broach Co. where his boss always said he was THE BEST Outside Diameter GRINDER he had ever had, and Bob took great pride in this. Bob retired in 1991. Bob served 3 years with United States Navy, entering on August 5, 1943 and Honorably Discharged on March 9, 1946. Bob attended the United States Naval Training Station (N.T.S.) in Great Lakes, IL. He had military tours in the Mediterranean and Pacific Theatres, including the Invasion of the Philippines on the U.S.S. Tulagi. Bob was awarded the European African Middle Eastern Area Campaign Medal, Asiatic Pacific Area Campaign Medal, American Area Campaign Medal, and the Philippine Liberation Ribbon. Bob was extremely proud to be a WW II Veteran and told his stories up to week prior to his death. Bob loved to bowl and fish; bowling continued throughout the years with his wife Dolores and son David. Bob bought his family a summer cottage where he loved to fish and teach his children and grandchildren the art of fishing and boating. Even after Bob and Dolores moved to California, he would drive back to Michigan every summer until 2013. Bob loved to Read every day, play cards such as Cribbage and “Mississippi Mud.” One of Bob’s latest loves was playing Fantasy Football with Lance, Patrick, & Rick P. and teaming with his son David. Bob would always say his biggest achievement was his family. Bob will be missed by so many. Bob will be laid to rest at Green Valley Mortuary, Rescue, CA at private family service. A Celebration of Life will be held later in the year, information will be posted at greenvalleymortuary.com In lieu of flowers, the family ask that a donation be made to either Light of the Hills Lutheran Church, Cameron Park, CA or a charity of your choice in Bob’s name. The family wishes to extend their gratitude to UC Davis Medical Center for their support in his final days.

Robert (Bob) was born on July 31, 1924 in Detroit, Michigan. Bob was the only child of Edward and Doris (Thickett) Jarvis. When Bob was 14 years old, he lost his mother to cancer and at 15 his father left him to be cared for by his stepmother,... View Obituary & Service Information

The family of Robert George Jarvis created this Life Tributes page to make it easy to share your memories.