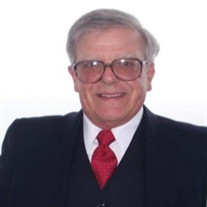 Memorial service for Bob Maerdian, age 83 of Placerville, CA will be held on Friday, September 3, 2021 at 11:00 a.m. at Green Valley Mortuary, 3004 Alexandrite Dr., Rescue, CA. A celebration of his life and luncheon will occur afterward in the Legacy Center from 12:00 – 3:00 p.m. Interment will be on Friday, December 3, 2021 at 1:00 p.m. at the Sacramento Valley National Cemetery, 5810 Midway Rd, Dixon, CA. In lieu of flowers, the family suggests donations be directed to Bob’s favorite charity: Sons of Union Veterans of the Civil War, National Organization, c/o National Treasurer, 17 Rubins Walk, Fredericksburg, VA 22405-2881. On-line donations are available. This is a 501(c) 3 non-profit organization; gifts to the Sons of Union Veterans of the Civil War, National Organization are tax-deductible. Bob passed away on Sunday, August 15, 2021 at his home. Robert C. Maerdian was born on August 18, 1937 at Presidio of San Francisco to Colonel Frank (Bill) R. Maerdian and Jeanette (Frolke) Maerdian. He attended Santa Barbara City College (A.A.) and he continued his education by transferring to San Francisco State University (B.A. in World History and a Teaching Credential). In April of 1986, he married Lydia T. Javurek of Montreal, Canada. Bob was employed by Gray Line San Francisco, the U.S. Army Reserve, and West Contra Costa Unified School District. Bob is known to others by his deeds, his hard work and his commitment to his family, friends, employers, and special interests. Some of his special interests were the Sons of Union Veterans of the Civil War; he was part of Civil War re-enactment days in Sacramento. He also helped members of Boy Scouts Troop 95 earn badges. He was also part of the Master Food Preserver, and the Raley’s coffee klatch. I first met Bob in 1978 on a Gray Line tour and we were married in 1986. He was a strong family man. He was always a responsible and steadfast person. Bob will be sorely missed by his wife, Lydia, son, Billy, daughter-in-law, Stephanie, sister, Adele, and numerous cousins, Ron Adam and the rest of the Adam family. He will also be missed by his mother-in-law, Christine, in-laws, Dorothy and Scott Armstrong of Toronto, ON, Canada and their children Lauren and Adam, and in-laws, Jasmine and Brian Mergl of Quispamsis, N.B., Canada and their children Andrew, Olivia, and Alexander. He is also be sorely missed by Stephanie’s family, Lia and James St. Charles, Tonita Velásquez, and the rest of their family. Bob has made many friends over the years and his loss will be felt by both his friends and other relatives. Bob was preceded in death by his parents, Bill and Jeannette Maerdian, and his father-in-law, Jan Javurek. To view livestream funeral service: https://my.gather.app/remember/robert-charles-maerdian

Memorial service for Bob Maerdian, age 83 of Placerville, CA will be held on Friday, September 3, 2021 at 11:00 a.m. at Green Valley Mortuary, 3004 Alexandrite Dr., Rescue, CA. A celebration of his life and luncheon will occur afterward in... View Obituary & Service Information

The family of Robert Charles Maerdian created this Life Tributes page to make it easy to share your memories.