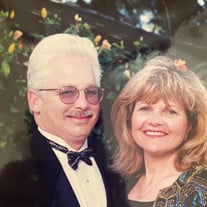 Robert Michael White of Cameron Park, CA passed away unexpectedly on November 21, 2020 at the age of 68 while on vacation in Kauai, Hawaii. Mike is survived by his wife Patricia M White, his mother, Essie L White, and his brother, Allen P White., nephews Joseph and Patrick, and nieces April and Alexis. Though Mike didn’t have any children of his own, he was known as “Uncle Mike” to many of his best friends children. Mike was born in San Diego on July 5 1952 to Edward J White and Essie L.White. He started his adventures as a toddler in Panama and lived in various cities while his father served in the military. Mike started his college years in Arkansas, where he had many fond memories of family and friends. He graduated from the University of San Francisco with a Masters in Organizational Behavior. He served in the military during the Vietnam War and was a proud veteran of the US Air Force. He started his career with AT&T where he held various managerial positions. He was with AT&T for 25 years and eventually retired and settled in Cameron Park to enjoy his retirement years. Mike was a devoted husband. He enjoyed doing day trading, fishing, playing 21 at the club, and trips to various destinations such as Hawaii, Newport Beach, Lake Tahoe, Mexico, Ireland, Scotland, England, and many more locations. He was a devoted Raiders Fan, and Season Ticket holder. He and Pat rode the train from Sacramento to the Coliseum for every home game for over 20 years. He and Pat made many friends while attending Raider home games. He was also a generous man. He was an animal lover, and contributed to ARF, Animal Rescue Foundation. His number one charity was St Jude’s Hospital where he has contributed for many years. In lieu of flowers, memorial contributions to the aforementioned charities would be appreciated

Robert Michael White of Cameron Park, CA passed away unexpectedly on November 21, 2020 at the age of 68 while on vacation in Kauai, Hawaii. Mike is survived by his wife Patricia M White, his mother, Essie L White, and his brother, Allen P White.,... View Obituary & Service Information

The family of Robert Michael White created this Life Tributes page to make it easy to share your memories.