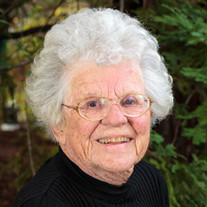 Ruth “Joan” Miller Nov. 18, 1923 - Oct. 5, 2017 “Once a Marine, Always a Marine!” Ruth “Joan” Miller, (nee Hemmings) born Nov. 18, 1923, in Los Angeles, Calif. passed away on Oct. 5, 2017. She graduated from Fairfax High School and, during World War II, encouraged by a recruitment poster urging women to “Be a Marine. Free a Marine to Fight,” she and her best friend “Bettie,” on Dec. 2, 1943, when were twenty years old, enlisted in the United States Marine Corps Women’s Reserve (WR). As a WR, she trained at Camp Lejeune in North Carolina, and following boot camp, was stationed at 8th and I in Washington, D.C. where she served as secretary to the Commandant General in the rank of Sergeant. It was there she met the love of her life, Marine Corps Staff Sergeant, Richard J. Miller. They married on Aug. 18, 1946, and before he passed in 1999, they happily celebrated fifty-three years of marriage. They settled in Van Nuys, Calif. where, in 1952, their daughter, Cathy was born. In 1958 they moved to Placerville, CA where she worked as a secretary within the community until her retirement. Always active in military causes, she participated in Marine Corps Reunions, traveling to many cities over the years and became active in local branches of the American Legion where she held every available office, ultimately becoming Commander. Joan joined the Fleet Reserve, Marine Corps League, Native Daughters and Patrons Club (Folsom Lake College). Veterans were her passion, and she was selected to sit on the Veteran’s Affairs Commission representing El Dorado County. An avid golfer, she played at Cold Springs Golf and Country Club in Placerville. She enthusiastically played many group games and loved to play poker, bingo, bunco, O7 and Phase 10. She was a member of the local St. Patrick R.C. Church for fifty-nine years and was a resident at Hidden Springs Villa for the past seventeen years. Joan was devoted to her granddaughters Kelly (Lewis), Melissa (Wilson) and great-grandson Caiden (Lewis). The family requests in place of flowers, donations be made in her name to the Marine Toys for Tots Program. Services will be held on Tuesday, October 17, 2017. Mass will be said at 11 a.m. at St. Patrick’s R.C. Church at 3090 Benham St, Placerville, Calif. with a reception to follow at 12 noon. At 2 p.m, a full military funeral honors ceremony is scheduled at Westwood Hills on Cold Springs Road, Placerville. On the occasion of the first anniversary of its establishment, the WR received a message from President Franklin D. Roosevelt, in which he observed, "You have quickly and efficiently taken over scores of different kinds of duties that not long ago were considered strictly masculine assignments, and in doing so, you have freed a large number of well trained, battle ready men of the corps for action." Her family and the community will truly miss her and thank her for her service during World War II.

The family of Ruth "Joan" Miller created this Life Tributes page to make it easy to share your memories.