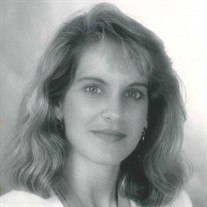 On August 19th, 2020 Sandy Bussey Cole passed away comfortably, peacefully, and on her own terms after surrendering to a long and tiring battle with Leukemia. Her loving husband and son, Mike and Bryan, held her hand until the very end at UC Davis Medical Center when she decided she was ready to join her mother Sadie and father Lewis in heaven. Sandy was born to parents Lewis and Sadie Bussey in Downers Grove IL on October 5th, 1960 and was the baby of the family. Sandy is survived by her son, Bryan Cole; her husband, Michael Cole; her 3 older sisters, Marilyn Francis, Barbara Slansky, and Nancy League; and her brother Robert Bussey. Growing up Sandy was the fifth child and younger by 10 years from the other four. She had the privilege of being raised not just by her parents, but also her 3 sisters and brother who gave her lots of attention. As a teenager Sandy took up an interest in music and played the French horn and Piano. She eventually graduated Downers Grove High School in the class of 1978 and was accepted into University of Illinois at Champagne-Urbana’s music program to play the French horn. During her college years Sandy decided to switch her major and graduated with a Bachelor of Science in Business Administration in 1982. After working a few different jobs Sandy finally found she was really great in sales and helped start and grow the Cole family business, Metroform, into the successful printing and mailing company it is today. After many great years at Metroform Sandy settled down with her husband Michael and gave birth to her son Bryan. Throughout Bryan’s youth Sandy took a real pleasure in being a mom and gave absolutely everything she had to make sure Bryan was well taken care of. When Bryan was getting ready to start college and move out Sandy was tasked with a challenge and diagnosed with breast cancer which she was able to fight off with no issue. After those events Sandy decided that she would devote lots of her time to living a healthy lifestyle and became a cyclist. She then joined The Bodacious Biking Babes women’s cycling group where she made lots of her closest friends who she would go biking and wine tasting with for years. Those biking babes eventually helped support Sandy all the way through her final battle when she was diagnosed with Leukemia in 2018. There will be a small funeral service held for Sandy on 8/27/2020 at Green Valley Mortuary followed by a massive celebration of life sometime in the following months to come. When undergoing treatment Sandy’s favorite Doctor was also a cyclist by the name of Joseph Tuscano. He is involved with the annual Crush biking Challenge which raises money to help patients like Sandy fight liquid tumors such as leukemia and lymphoma. Please consider making contributions to https://deleuzefoundation.org/

On August 19th, 2020 Sandy Bussey Cole passed away comfortably, peacefully, and on her own terms after surrendering to a long and tiring battle with Leukemia. Her loving husband and son, Mike and Bryan, held her hand until the very end at UC... View Obituary & Service Information

The family of Sandy Bussey Cole created this Life Tributes page to make it easy to share your memories.