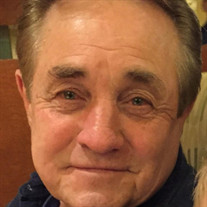 Stanley Alton Wojahn, age 79, passed away in the arms of his daughter, Tami, on January 5, 2022 in Placerville, California. Stan was born in Albee, South Dakota on March 24, 1942 to Grace and Rolland Wojahn. He was one of the 11 children who worked on the family farm and because of the needs of the farm, he left school after eight grade. From a young age, Stan had a longing to move to California and moved to Southern California in his late teens to early twenties. He started working as an ironworker and met Doris King and her three children: Debbie, Larry and Gary (from a previous marriage). They were married and started a life together and welcomed a daughter (Tami) in 1966. They moved to Northern California in 1968 and started their beloved ranching life on 17 acres. Despite his lack of education, Stan had a successful and fulfilling career as a foreman with the ironworkers for 25 years until he retired. Stan and Doris lived out their life, happily in El Dorado County where they had many, many friends. Stan was known for his infectious smile and his many, funny jokes and funny stories. His favorite past times were spending time with family and friends, going to the casino, playing the lottery and spending time at the Moose Lodge playing cards. Stan was a longtime member of The Moose Lodge and enjoyed hanging out with friends there and contributing his time by helping out and cooking in the kitchen, on occasion. He and Doris were a constant in their grandchildren’s lives and were loved, dearly, by all/ He is preceded in death by his wife of 54 ears, Doris Wojahn, son Larry King, grandson Wyatt, brothers Steve, Mike, Calvin, and Neal and sister Elaine. He is survived by his daughters Tami Bailey, Debbie Vibbart, son Gary King, his brothers Gary, Larry and Lowell, sisters Wanda, Marion and grandchildren Gavin, Sean, Michael, Michelle, Jayson, Kayla, Lori and Mikey Hutchison and great grandchildren. Family and friends are invited to attend his funeral service at Green Valley Mortuary – 3004 Alexandrite Drive, Rescue, California - on Friday, January 14, 2022 at 11:00am. Following the service, join us for a Celebration of Life at The Moose Lodge – 4310 8 Mile Road, Camino, California – that same day from 1:00pm to 4:00pm.

Stanley Alton Wojahn, age 79, passed away in the arms of his daughter, Tami, on January 5, 2022 in Placerville, California. Stan was born in Albee, South Dakota on March 24, 1942 to Grace and Rolland Wojahn. He was one of the 11 children who... View Obituary & Service Information

The family of Stanley Alton Wojahn created this Life Tributes page to make it easy to share your memories.

Stanley Alton Wojahn, age 79, passed away in the arms of his...