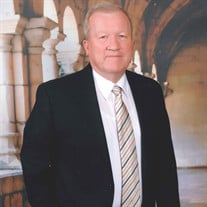 S. Kent Madsen 1945 - 2016 S. Kent Madsen passed away at his Placerville home on April 18, 2016. Born on August 11, 1945 in Provo, Utah to Margaret Lydia and Farrell Dean Madsen his growing up years were spent in Provo, Utah, Eugene, Oregon, and Chico, California. Kent graduated from Brigham Young University in 1969 and received a PhD in Romance Languages and Literature from Duke University in 1974. His professional life centered on technical writing and customer education for Hewlett Packard. After retiring in 2004 he enjoyed volunteering at the El Dorado Food Bank and served on their board for several years. He loved music and sang with Cantare Chorale for a number of years. Currently he was involved in promoting community service. Faith and family were the focus of Kent’s life. He loved spending time with his family whatever the activity and getting together with his brothers and sister and their families. As a young man he served as a missionary in the Franco-Belgian Mission of the Church of Jesus Christ of Latter-day Saints. Throughout his life he enjoyed working with the youth and served as a Seminary teacher, Scout Master, and Bishop of a congregation for young single adults. Recently Kent and Ella served as Senior Missionaries on the French island of La Reunion in the Madagascar, Antananarivo Mission. He is a man of great faith, love, and kindness and is loved and admired by all who knew him. He is survived by his wife of 46 years, Ella, and his children, Margot Gardiner, Paul (Danielle), Anne, David (Katie), his grandchildren, Ryan, Lindsay, Brooklyn, Maya, Garrett, Benjamin and James, and his siblings and their spouses: Dean and Susan, Niel and Florence, Marilyn and David Hutchings, and Dale and JoAnne. He was preceded in death by his beloved parents and treasured son in-law, Evan Gardiner. Funeral services will be held on Saturday, April 23, at 11:30 a.m. at the LDS Chapel at 3431 Hacienda Road in Cameron Park, Calif. A viewing will be held from 10:00 a.m. to 11:00 a.m. In lieu of flowers the family asks that you donate to the American Cancer Society.

The family of Stirling Kent Madsen created this Life Tributes page to make it easy to share your memories.