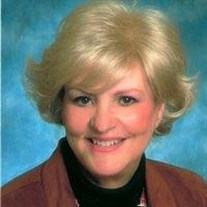 Suanna had a zest for life, a warm smile, a sparkle in her eye and open arms. She loved music, traveling and simply adored her children. She was such a strong, compassionate and caring person. Those who knew her saw what a genuinely special person she was and how having her as a part of their lives was a gift in return. Always in service of others, she never shied away from giving of herself, her time or her love to those in need. Born in Miami, Arizona of Danko and Maxine Gurovich and the eldest sister to Patricia and Danilo. Suanna excelled in her studies and graduated with honors from Miami High School. She had a passion for music and played the piano and violin. She went on to study at the University of Arizona where she met her Husband, Michael Kooken. As a young woman, she ventured alone to studied abroad in Florence, Italy - immersing herself in Arts and Language. Upon her return she married and finished her Bachelors degree at California State Long Beach. She was fluent in several languages a skill she used often and throughout her life. Suanna was Married for 23 years. During this time she had 3 Children which she loved dearly, Danielle, Michael and Marianne. A remarkable business woman, in 1976 with 3 children under 5, she began her career in Real Estate and later earned her Brokers License in 1990. She was quickly a success in the industry and remained a top producing professional in Diamond Bar California, Houston Texas and San Francisco California. She was an active board member panelist on the Ethics and Professional Standards committees as well as President of the Women’s Counsel of Realtors. Using her skills, Suanna began property renovations and bought and sold several homes and apartment buildings across the city of San Francisco leaving her mark on the city she loved so much. She helped so many families with her skills as a realtor. She retired from Real Estate in 2016 and moved to the Sacramento region to be close to her children. Suanna loved travel and if she couldn’t get someone to go with her, she’d go it alone. Often traveling to Europe and to Montenegro to connect with her family and Cerna Gorna roots. On several occasions, she would return with someone in search of a better life whom she’ d sponsor and supported on their journey . Her door was always open, Suanna cared for the elderly and the ill, She dedicated her life to others. She cared for her Cousin, Gloria Jean Henslee, for 25 years until her passing this last year. She was a member of many churches throughout her life and was not dedicated to just one. As a child, she was raised in the Church of Jesus Christ and the Latter-day Saints but later in life joined the Serbian Orthodox Church In San Francisco where she sang in the choir. She just loved the music and the message, she would say it “filled her soul and she felt close to God.” When she moved to Sacramento she found the Serbian Orthodox Church had no choir, so she joined the Greek Orthodox Church in Sacramento and became an “honorary” Greek. She was welcomed to the choir and found her friends there. She was active in all the charitable endeavors whether it was stuffing backpacks for kids or serving Spanakopita and Baklava at the Greek Festival. Suanna is Survived by Her Daughter Danielle and Bruce Marquez, Son Michael and Angela Kooken and Grandson Trevor Kooken, Her Daughter Marianne and Earl Crouchley and Granddaughter Lilly Crouchley. her Sister Patricia Fair and Brother Danilo and Lori Gurovich, Niece Whitney and Blake Fentress and Chandler Reagan and Blyth, Niece Alyssa and Russell Ramirez and Sterling Ramirez and Chloe Ramirez. Niece Kira Gurovich, Nephew Jason Kooken and Andrew Kooken. Suanna loved with all of her heart. She left so many friends behind who loved her as well. She will be missed by all who knew her. Tears were shed and candles lit around the world the night she passed. Thank you, Mike Kooken

Suanna had a zest for life, a warm smile, a sparkle in her eye and open arms. She loved music, traveling and simply adored her children. She was such a strong, compassionate and caring person. Those who knew her saw what a genuinely special... View Obituary & Service Information

The family of Suanna Gurovich created this Life Tributes page to make it easy to share your memories.

Suanna had a zest for life, a warm smile, a sparkle in her eye...