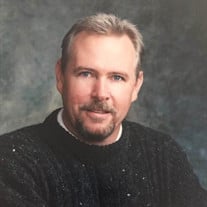 Timothy Conrad O'Brien, 60, passed away in his Rescue, CA home on Sunday, April 8, 2018. Tim was born November 21, 1957, in Sebastopol, California. He was the oldest son of the late Conrad James and Nora (nee Crowley) O'Brien. During Tim's early years, the family lived in California and Arizona. By his high school years, they had returned to California where Tim graduated from Gridley High School. He attended college before moving to San Mateo County. He met his wife, Kathryn Ann Bolton, when they were both working in the real estate industry: Tim for First American Title Insurance Company and Kathy as an agent. They were married on September 5, 1987, in Gridley, California. Over their 30 years together, Tim and Kathy resided in Foster City, CA; Sacramento, CA; Pueblo, CO; Colorado Springs, CO; and, for the past 17 years, Shingle Springs, CA and Rescue, CA. Tim will be remembered for his kindness and generosity; he was known for his eagerness to lend a helping hand to his family and friends. His enthusiasm for music extended to all genres, and his passions for Irish culture and his own Irish ancestry were a frequent influence. He also loved the ocean. Tim is survived by his wife, Kathy; sister and brother-in-law Noreen and Ed McConnell of Vancouver, WA; and brother and sister-in-law Jim and Casey O'Brien of Chico, CA. He is additionally survived by his mother-in-law and father-in-law Jane and Paul Bolton of Oklahoma City, OK; sister-in-law and spouse, Nancy and Randy Miller of Paris, TX; and brother-in-law and spouse Steve and Sharon Bolton of Jones, OK. He will be missed by his nieces and nephews: Katherine, Edgar, Colin, Jaclyn, Conrad, Megan, Maranda, Samantha and Stephanie, as well as great-nieces and great-nephew: Nora, Emmerson and Lincoln. Tim's funeral service will be Friday, April 27, 2018, 11:00 am PT at Holy Trinity Catholic Church, 3111 Tierra de Dias Dr., El Dorado Hills, California. Interment will be at Arlington Memory Gardens, Oklahoma City, Oklahoma. In lieu of flowers, donations may be made to Padre Pio Foundation of America at www.padrepio.com.

Timothy Conrad O'Brien, 60, passed away in his Rescue, CA home on Sunday, April 8, 2018. Tim was born November 21, 1957, in Sebastopol, California. He was the oldest son of the late Conrad James and Nora (nee Crowley) O'Brien. During Tim's early... View Obituary & Service Information

The family of Timothy Conrad O'Brien created this Life Tributes page to make it easy to share your memories.