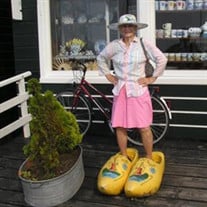 Valaree's maiden name was Vander Aarde meaning of the earth. There is now a void in our earth, some glad morning when this life is o’er, I'll fly away to a home on God's celestial shore. These are words from a favorite song. Valaree has flown to a land where joys shall never end. Valaree was a native Californian, graduated from Canoga Park High School as Valaree Dawson. Married 27 years to Lee Dawson, ending in divorce. Valaree had four children Jim, Shari, Dan, and Jeff. Dan Passed away just after his 60th Birthday. Valaree was the coolest Mom. Valaree was a U.S. Postal carrier and clerk for 22 years in Chatsworth. Valaree was chosen by her peers to sell commemorative Postage stamps at the 1992 Olympics at the UCLA venue. It was an experience she cherished. Valaree married Brad Petritsch who worked for Lockheed. When they both retired, they moved to Coarsegold near Yosemite. They built a kit cedar home on 8 acres. Brad died in 2002, by Valaree's 80th birthday the 8 acres were getting too hard to take care of, so Valaree moved to Shingle Springs into a mobile home on property of her daughter Shari and granddaughter Jami. Valaree's great grandsons kept her busy attending soccer, volleyball, and football games. She wore her Ponderosa Bruins visor every day. Valaree was involved in the running of every community church she where she lived. At the Lake Manor Chapel in Chatsworth, she was the bookkeeper/secretary and anything else she was called to do. In Coarsegold she helped build a new community church volunteering and bookkeeping too. In Shingle Springs Valaree joined the Gold Country Baptist Church and made a lot of wonderful friends staying involved. Genealogy was Valaree's passion. Belonging to the Coarsegold Oakhurst organizations to investigate her family tree. When she moved to Shingle Springs, she joined the Placerville Roots and Gold Dust genealogy group. Valaree traveled with her daughter Shari and husband Bob whenever the Motorhome left from Alaska to Florida. Valaree is survived by her sons Jim Dawson, Jeff Dawson and wife Andi, Daughter Shari Smith, and husband Bob. Valaree has 7 grandchildren Jami Charron and husband Dave, Rob Smith and wife Jill, Jim Guenther and wife Kelsey, Drew Dawson and wife Stephanie, Morgan Dawson, Maci Dawson. Colby Dawson preceded her in death. She has 10 Great Grandchildren Tanner Charron and wife Alexis, Taylor Charron, Kyle Charron, Kristian Charron, Chase Smith, Jack Smith, Gavin Dawson, Ava Dawson, Aria Dawson, Logan Dawson. She has 1 Great-Great grandchild Jensen Charron. Written by her daughter Shari

Valaree's maiden name was Vander Aarde meaning of the earth. There is now a void in our earth, some glad morning when this life is o&#8217;er, I'll fly away to a home on God's celestial shore. These are words from a favorite song. Valaree has... View Obituary & Service Information

The family of Valaree Lucile Petritsch created this Life Tributes page to make it easy to share your memories.

Valaree&#39;s maiden name was Vander Aarde meaning of the earth....