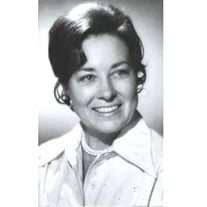 Wanda Ettamae Hepler, age 94, formerly of Cameron Park CA, passed away peacefully on July 21, 2017 at Sunrise of Fair Oaks (CA) from natural causes. Wanda was born on October 29, 1922 in Chicago IL to Raymond and Vida Sines. She was preceded in death by her husband, Kenneth Max Hepler; brother, Louis Sines; brother, Frederick Sines; and her parents. Survivors include sons Kenneth (Yvonne) of West Olive MI; Keith (Vicki) of El Dorado Hills CA; Kevin (Lori) of Yorba Linda CA with their daughter Marissa; daughter Vidabeth (Steve) Peets of Ooltewah TN with their children Danielle, Summer and Steven Max; sister Patricia (Ronald) Burke of Blue Eye MO, and numerous nieces, nephews, and cousins. You may pay your respects by adding condolences or a photo on the Tribute Wall of this website, and learn more about Wanda’s life through the photo tribute page at: http://www.trailbikesportsmen.org/_private/Wanda/Wanda-Hepler.htm From Vida: Wanda truly lived a life centered on faith, family, and friends. She met her future husband Ken while attending Elmhurst College and they married January 22, 1943, ahead of his deployment in World War II. During Ken’s Navy service, Wanda worked as a grade school substitute teacher. Throughout their 70-year marriage, they raised four children, leaving a legacy of love and laughter, traveled the world, relocated for Ken’s career ten times (including 3 years in Mexico City), enjoyed many lake vacations boating and skiing, and spent summers with family in Chicago IL and Wanda’s long-time family home in West Olive MI. In later years, they stayed in the renovated one-room schoolhouse located just down the hill from her parents’ house, she had inherited from her Mother and eventually donated to the Ottawa Township Historical Society. Wanda’s greatest passion was music. She trained in vocal classical technique and style and played piano. She sang at weekend school dances with the band formed by her brother Louis, with Louis on sax and later-to-be husband Ken on trombone. She continued to sing in church and at functions throughout her life. Wanda’s charitable works were through the women’s clubs she joined, gaining lifelong friendships in each of the cities they moved to; her most memorable were her 1970’s membership and Presidency in the Women’s Committee of the Glendale Symphony Orchestra, and her past 40 years as an active member in PEO. A graveside service for both Wanda and Ken will be held at the Olive Township Cemetery in West Olive, Michigan next summer, 2018. We want to thank the caring nurses, care managers and all the staff at Sunrise of Fair Oaks, where she lived for the past year, as well as the staff of Vitas Hospice who also helped smooth the road on her final journey into the arms of our Lord. Wanda will be missed by all who knew and loved her; but rather than mourn the absence of the flame, let us celebrate how brightly it glowed!

Wanda Ettamae Hepler, age 94, formerly of Cameron Park CA, passed away peacefully on July 21, 2017 at Sunrise of Fair Oaks (CA) from natural causes. Wanda was born on October 29, 1922 in Chicago IL to Raymond and Vida Sines. She was preceded... View Obituary & Service Information

The family of Wanda Ettamae Hepler created this Life Tributes page to make it easy to share your memories.