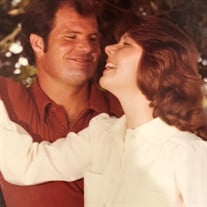 Warren Glen Turner was born on August 9, 1952 in Fresno, California to Warren and Alice Turner. He passed away on June 6, 2018 in El Dorado Hills, California after battling cancer for two years. He is survived by his wife, Pam (Holtry) Turner, sons Troy Turner (wife: Malissa), Kyle Turner (wife: Lauren), Bryce Turner (wife: Kalo) and daughter, Gaylynn (Turner) Forsyth; his brother John Turner and sisters Susan Turner, Tammy Turner, and Julie Turner Roberts. He will be missed by all including his nine grandchildren whom he adored: Taylor, Addie, Kayden, Mattox, Kalina, Ava, Henry, Winston and Truman. Warren grew up in Fresno working with his father and brother John in the family landscape gardening business. He always had a love and fascination for any kind of tractor and owned his first at the age of 8. Some of his other favorite things were: motorcycles, animals, dancing, the Gospel of Jesus Christ, his best friend and brother, John who could always make him laugh and of course, his amazing children and grandchildren. Warren graduated from Paso Robles High School in 1970. In 1971- 1 973 he served a two-year mission in Australia for the Church of Jesus Christ of Latter-Day Saints. After returning, he started his own business doing landscape gardening. In 1978 he married Pam Holtry in the Oakland Temple for time and all eternity. In 1980 they moved to the Sacramento area which is where they raised their family. Warren will be remembered as a caring and loving person who loved everyone who never spoke ill of anyone. He was loved and respected by nearly everybody he knew. He performed service for many people and would be late to meetings or family events because he had stopped to help a stranded motorist or anyone in need. He will be greatly missed by all of his family including nieces and nephews. His family’s knowledge of the Plan of Salvation and that “families are forever” comforts them to know that they will be together again. Funeral for Warren will be: Thursday, June 14, 2018 Viewing at 9:30 a.m. Funeral at 10:30 a.m. Church of Jesus Christ of Latter-Day Saints 89 Scholar Way Folsom, CA 95630

Warren Glen Turner was born on August 9, 1952 in Fresno, California to Warren and Alice Turner. He passed away on June 6, 2018 in El Dorado Hills, California after battling cancer for two years. He is survived by his wife, Pam (Holtry) Turner,... View Obituary & Service Information

The family of Warren Glen Turner created this Life Tributes page to make it easy to share your memories.

Warren Glen Turner was born on August 9, 1952 in Fresno, California...