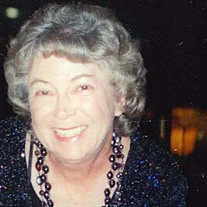 Whynama June Scott (McKaughan) passed away on February 21, 2019 at Kaiser Hospital in Roseville, CA at the age of 81. Whynama is survived by her devoted husband of 57 years Robert Leroy Scott; children: Corinna Isaac (Dan Somers) and Jefferson Johnson; grandchildren Zachary Johnson, Michael Isaac, Ashley Johnson, Jefferson Johnson, Jr.; great-grandchildren: Isabella Isaac and Brantley Isaac; brother Don McKaughan (Frieda McKaughan), Sacramento. She is preceded in death by her mother Fay McKaughan, father Oliver McKaughan, brother Narceles McKaughan, and sister Canova Edland of Sacramento. Whynama was born on March 16th, 1937 in San Luis Obispo, CA to Fay and Oliver McKaughan. She graduated from Grant High School in 1955 with straight As and was a skillful typist. She married Robert Leroy Scott in Sacramento, CA, on September 2nd, 1961. Whynama had a successful career as a secretary at Aerojet for 50 years, working on projects like space shuttles and military defense systems. Her children remember her as a caring, generous mother who instilled a strong work ethic and family values to those around her. A devoted Christian, she opened up her house to others and held many family gatherings, fostering fellowship across the generations of relatives. Whynama was an avid traveler and often went on trips with her friends and family, always returning bearing gifts from her trips. She was passionate about supporting Big Brothers Bowling and Stanford Home for Children and often helped single mothers. She had a big heart and would go the extra mile to help people unconditionally. Her kind spirit will be missed by all. A service is scheduled for Friday, March 1st, 10:00 am at Green Valley Mortuary & Cemetery, 3004 Alexandrite Drive, Rescue, CA. All are welcome to attend a celebration of Whynama's life following the service.

The family of Whynama J. Scott created this Life Tributes page to make it easy to share your memories.