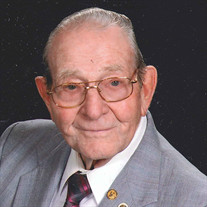 Wilfred “Bill” Matthew Striegel On January 23, 2017, Wilfred “Bill” Matthew Striegel, 92 years old, of Cameron Park, passed away peacefully and was reunited in heaven with his loving wife of almost 53 years, Marie K. (Lang). Bill was born on July 2, 1924, in Jasper, Indiana to parents Henrietta P. and Frank J. Striegel. He grew up on the farm in Southern Indiana through the Great Depression and was engrained with a strong work ethic. As a World War II veteran, Bill joined the US Army in 1943 and was a combat engineer participating in the invasion of Southern France in 1944 and the liberation of Europe in 1945. After VE day, Bill served in the Philippines until the end of World War II. After the war, he volunteered to be a military honor guard for the repatriation and interment of American war casualties from Europe back to the Midwest. Bill later went on to make the military his career by joining the US Air Force and serving for over 26 years combined military service being stationed with his family at various Air Force bases in the US, England, France and Germany. Following the military, Bill worked in civil service at the Sacramento Army Depot and retired after 15 years. A true, proud and noble American patriot, Bill never needed an excuse to display the American flag at the family residence. He also enjoyed working tirelessly around the house and keeping his automobiles immaculate! Bill was a loving father to daughter, Marlene Hensley, and son Jack Striegel and grandfather to 5 grandchildren and 6 great grandchildren. “Uncle Wif”, as he was known by back home in Indiana, was one of five siblings and is survived by brothers Charles Striegel and Paul Striegel. Wif was preceded in death by his sister Cyrilla Fromme and brother Harold Striegel. Bill was a member of Holy Trinity Catholic Church in El Dorado Hills, a member of the Knights of Columbus, the Air Force Sergeant’s Association, participated in the VFW and the American Legion and was a 10 Gallon Donor at the Sacramento Blood Bank. The family would like to express their warmest gratitude to the caring staff of Bill’s home at Ponte Palmero in Cameron Park and of Snowline Hospice who took loving care of him. A vigil and prayer service will be held Sunday, January 29, 2017 at 6:00 PM at Green Valley Mortuary in Rescue. Funeral Services will be held on Monday, January 30, 2017 at 11:00 AM at Holy Trinity Catholic Church in El Dorado Hills. Interment with military honors will take place Monday, January 30, 2017 at 1:45 PM at Calvary Catholic Cemetery, Sacramento. Donations may be made in Bill’s memory to Snowline Hospice in Placerville.

The family of Wilfred Matthew Striegel created this Life Tributes page to make it easy to share your memories.