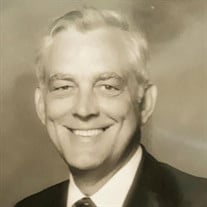 William "Bill" Don Lowe was born January 16, 1937, in New Edinburg, Arkansas to Royce Stanley Lowe Sr. and Rachel Haskins. Bill entered the world at home on a kitchen table joining his older brother, Royce Jr. and later joined by his younger sister, Sue Carolyn. While still in high school Bill earned the rank of Eagle Scout. After high school he served in the Naval Reserves and earned a degree in Business Administration from the University of Arkansas at Little Rock. In 1959 Bill married Janet Dyer and enjoyed 60 years of marriage. Together they welcomed three children, Laura Ann, William Gregory (Pamela) and Jeffery Alan (Ashley). The couple have seven grandchildren, Anne-Marie (Craig), William, Ariana, Haley, Cadence, Dyer and Liliah. In June the couple welcomed their first great grandchild, Noah. Bill also loved and valued his relationships with his extended family members including his sister, Sue Carolyn and her sons, Mark, Jeff, Jason, Byron and Dustin. As well as his other nephews and niece, Mel, Mark and Melinda. Bill was and is loved by many people. He was a larger than life person who treasured his family, friends and hard work. Bill had many friends he valued and enjoyed spending time with. Two of his most supportive and treasured friendships were with long term friends Byron Crain and Bob Bradford. Bill proved the American dream is still alive and well. He started his career at the age of 16 as a bagger at Safeway and later retired as Executive Vice President of Safeway. He proved hard work, determination and perseverance are the answer to building the life you want. During his time away from his family while building his career, his supportive wife Janet provided the needed support at home. Bill truly wanted to help people become the best versions of themselves and was always available to offer advice to those around him. He was never boastful or full of himself, but remained humble and selfless, leaving his accomplishments to themselves. In his spare time Bill could often be found working his way through the latest crossword puzzle. Of all of his accomplishments, the greatest is the legacy of his love and devotion to his family. Bill truly gave everything he had to those around him. His love and devotion to his family was unconditional, relentless and complete. No sacrifice was too great. The hole left by our beloved husband, father, brother, uncle, Pops, great Pops and friend will never be filled. We will all miss him each and every day of our lives. We rest easier knowing he is now in our Father's arms. We eagerly await our reunion with him in heaven. And, as Pops would say, "Don't come home stupid".

The family of William Don Lowe created this Life Tributes page to make it easy to share your memories.