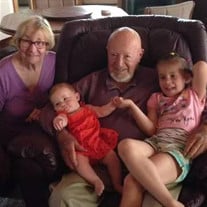 William Edward Thomas was born July 18, 1931 to Lacey William Thomas and Edna Mildred Thomas as the first of their two children (Bill's younger sister Nancy would be born a couple of years later). Originally known as Billie, he was known as Bill for most of his long life, although a few would always call him Billie, and some would call him William (for example his wife when wanting to make a point) and on the golf course he was often called Willie. Bill was born in Oakland, California and grew up there, primarily at 2532 Cordova, finishing high school at Fremont High in 1949. Bill met Dorothy Joyce Nielsen (Joyce) at Yosemite National Park and they married on September 12, 1953. Bill went to college at UC Berkeley, graduating with a degree in Business Administration in 1953. Bill's father was a long-time employee of Pacific Telephone and Telegraph (PT&T). To support his then young family Lacey was able to maintain this employment throughout the Great Depression, something for which the family was always grateful. Bill was able to get a job with PT&T prior to graduating from high school. However, after graduating from college Bill wanted to try something different and took a job with Bethlehem Steel in Pennsylvania in 1955. Bill moved out to Pennsylvania and the family followed thereafter. But the Pennsylvania experiment did not work out and the family moved back to Oakland, California in 1957 and Bill resumed working for PT&T for whom he continued to work until he retired from his job with PT&T. As Bill continued to work for PT&T, there were quite a few transfers throughout Northern California, to Sacramento, then Modesto, then the Bay Area (Moraga), Yuba City (Rough & Ready) and finally Sacramento where Bill finished out his career with PT&T, taking early retirement in 1986. With the transfer to Yuba City the family moved to Rough and Ready in 1964 where Bill and Joyce lived until they built their dream house at Lake Wildwood in 2001. In the late 1960's Bill, and a group of other citizens of Rough & Ready came up with the idea of local celebration they called "Succession Days" in honor of Zachary Taylor and the fact that the town had succeeded from the Union (creating the Great Republic of Rough & Ready) during the Gold Rush in the 1850's. Bill played a very prominent role in creating, planning for and actually pulling off "Succession Days". That first year it really turned into a wild, wild party. Bill even rode his horse, which was truly a brave feat under the circumstances. Also, in the 1960's Bill got into politics (with the consent of his employer) as he ran for and was elected to County Supervisor, District 4, in Nevada County. Everyone who knows Bill knows that he had strong opinions about politics, which he was not shy about sharing. Politics were never far from any type of discussion (sometimes argument-which he always got over) with Bill. Bill and Joyce enjoyed traveling with friends and/or family, going throughout the United States, to Canada, to Mexico, to Europe and to the islands in Hawaii and the Caribbean. Sometimes these travels were by motorcycle, with Bill and Joyce and Joyce's brother and sister-in-law, Bob and Lois Nielsen, taking an epic trip by motorcycle throughout the United States in 1986. Bill's home was decorated with artwork and other items purchased from their many trips. Lacey had a passion for golf, playing golf and watching golf on TV and following the biggest golf stars of the day in the printed press. That passion was passed on to Bill to an even greater degree. Bill loved everything about golf, including setting up the "game", the travel, the competition, the comradery, the drink after the end of the game and sometimes the card game afterwards. Bill took pride in being good at the game. In 1987 Bill and Joyce purchased a second home at Bermuda Dunes which included a membership in that famed course. Bill loved the desert, especially the golf and the desert's warm and sunny winter weather. After he turned 50 Bill even considered trying out for the senior tour, but a back injury ended that dream. Bill continued to regularly play golf throughout his life until he was physically no longer able to play. Bill collected and sold golf clubs, at one point literally having hundreds and hundreds of golf clubs. But what Bill loved most of all and prided himself on being an expert, was food and eating that food. He knew and went to the best places. He knew how best to prepare things and would insist that they be prepared the "right" way. He knew what was good and what was "Yuck!" and was not shy and telling anyone who would listen. Bill even tried his hand at owning a restaurant, which itself is quite a story. Bill loved all types of food, from hot dogs to gourmet cuisine. Bill loved dessert too, sometimes eating that first (just ask Nancy). Bill loved to entertain, mixing drinks and helping Joyce determine the menu for the party and then supervising as much as he could. Bill even developed some specialties which he cooked himself, such as Latke. To the very end Bill had a healthy appetite. Bill is survived by his wife, Joyce of almost 66 years. He is also survived by his four children, Steve, Mike, Glen and Sue and their spouses. He is survived by his ten grandchildren, Tom, Brandon, Matthew, Lauren, Jeremy, Laurel, Erin, Niels, Blair and Andrew. He is survived by his six great grandchildren, Cody, Brianna, Emma, Mason, Liam and Max. Bill is also survived by his sister Nancy.

William Edward Thomas was born July 18, 1931 to Lacey William Thomas and Edna Mildred Thomas as the first of their two children (Bill's younger sister Nancy would be born a couple of years later). Originally known as Billie, he was known as... View Obituary & Service Information

The family of William Edward Thomas created this Life Tributes page to make it easy to share your memories.